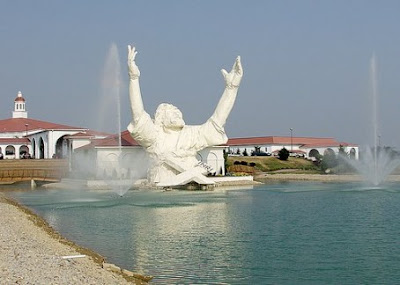 MONROE, Ohio – A six-story-tall statue of Jesus Christ with his arms raised along a highway was struck by lightning in a thunderstorm Monday night and burned to the ground, police said.

The "King of Kings" statue, one of southwest Ohio's most familiar landmarks, had stood since 2004 at the evangelical Solid Rock Church along Interstate 75 in Monroe, just north of Cincinnati.

The sculpture, 62 feet tall and 40 feet wide at the base, showed Jesus from the torso up and was nicknamed Touchdown Jesus because of the way his arms were raised, as though reaching out to catch a football. It was made of plastic foam and fiberglass over a steel frame, which is all that remained early Tuesday.

You mean a touchdown signal.

Apparently your self proclaimed man god didn't approve of a graven image of some guy.
Its unknown what this jesus guy actually looked like. It was not recorded anywhere in any conical book. This look all started with that raggedy sheet known as the shroud of turin I'm told.