Al Gore has his own "blue dress" problem 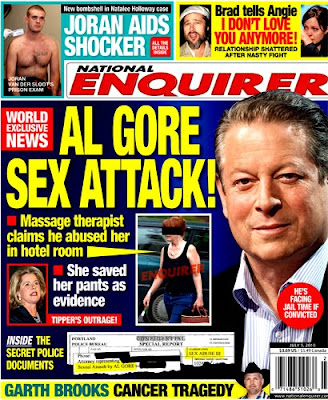 In a bombshell new development in the AL GORE sex scandal -- broken EXCLUSIVELY earlier today by The ENQUIRER -- the Oregon
District Attorney says there's "the possibility of a criminal prosecution."

Our investigative team uncovered the amazing story just weeks after the former Vice President announced that he and wife TIPPER were ending their 40-year marriage - amidst reports she suspected her husband was involved with "a gorgeous massage therapist."

No criminal charges were brought against Gore, but the Portland police prepared a document marked "Confidential Special Report" - which records the explosive allegations of "unwanted sexual contact" by Al Gore "at a local upscale hotel."

The ENQUIRER is withholding the name of the 54-year-old woman making the stunning accusations because she is potentially a sex-crime victim.
Posted by Palmoni at 8:16 PM

Al gore is a shitbag?!! GASP! shock! The only people surprised by his are the ones who didn’t already realize what a piece of shit he is.

So what he had to get some spermy out?