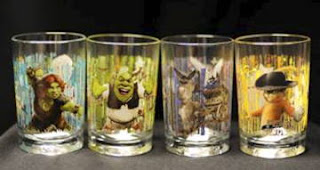 What else is new? From cranes to cadmium laced paint, China's only interest is to ripoff the customer or poison the kids of their customers with damaged goods.

Federal scrutiny of the glasses began last week. The Washington office of U.S. Rep. Jackie Speier, a California Democrat who has proposed strictly limiting cadmium in jewelry, received what a spokesman described as an anonymous tip that testing with an X-ray gun that estimates how much cadmium an item contains indicated the metal was present in the glass paint. Speier's office requested samples of the glasses from the tipster, and upon receiving them May 27 sent them to the CPSC for further investigation.
Posted by Palmoni at 8:08 AM