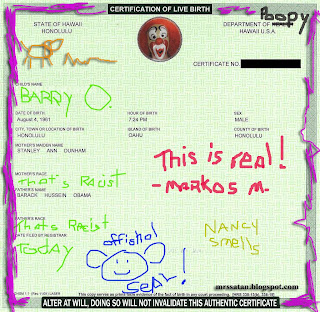 A college professor who worked as a senior elections clerk for the City and County of Honolulu in 2008 is making the stunning claim Barack Obama was definitely not born in Hawaii as the White House maintains, and that a long-form, hospital-generated birth certificate for Obama does not even exist in the Aloha State.

"There is no birth certificate," said Tim Adams, a graduate assistant who teaches English at Western Kentucky University in Bowling Green, Ky. "It's like an open secret. There isn't one. Everyone in the government there knows this."

WND confirmed with Hawaiian officials that Adams was indeed working in their election offices during the last presidential election.

"His title was senior elections clerk in 2008," said Glen Takahashi, elections administrator for the City and County of Honolulu. 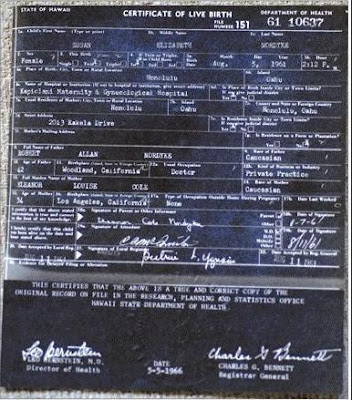 Above is a copy of a birth certificate of someone born in Hawaii the day after Obama was born. 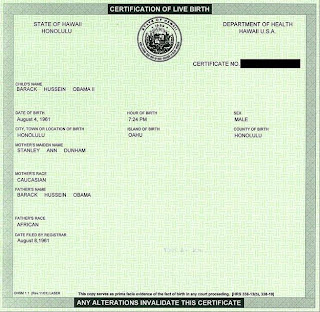 Miraculously, Bo got the "modern certificate."
Posted by Palmoni at 9:09 AM

That is such an obvious fake.

1) The design of the outline of the certificate of live birth is changed each year. Its not even the right design for the alleged year.

2) The race catagories are Caucasian, Mongloid or Negroid. There was no " African" Term used when this was supposedly made.