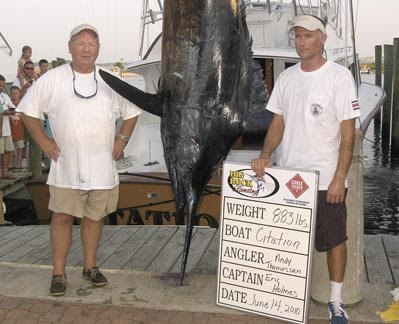 If a person gets caught fishing without a license, in most cases, it results in a fine of perhaps a few hundred dollars.

For those aboard Citation, however, the infraction represents a setback of nearly $1 million.

The vessel's anglers had been participating in the 52nd annual Big Rock Blue Marlin Tournament, June 11-19 off North Carolina. Andy Thomossan landed what was by far the biggest fish: an 883-pound marlin, a tournament record.

The team on Saturday was declared winner of the prestigious competition, and there was plenty of celebration.

However, there also was a post-event lie-detector test, after which it was revealed that one of the hired crew did not possess a valid fishing license, available in North Carolina for only $15, or $30 for non-residents.

That was a violation of tournament rules and after lengthy deliberation, according to Evans Kistler of the Carteret County News-Times, tournament officials late Tuesday disqualified the catch and and denied the Citation team the winning purse.

"No record. No money. No fish. No nothing. Yep, it's a nice ending to the story isn't it?" Thomossan told the Jacksonville Daily News. "He failed to get a fishing license, but we didn't know it. He told us he had it. He didn't. So you take a man at his word, you know?"

That man is Peter Wann. According to the state's fisheries division, he went out and bought a license after the catch of the monster marlin, bringing more shame to his team. He'll be fined $35 and ordered to pay court costs totaling $125.
Posted by Palmoni at 8:42 AM

Theres one in every bunch.

Some idiot misfit that'll ruin it for everyone.

He might want to find a new group to hang with though. He may be the bait next time they go looking for great whites.