Homeless man holds up Chase bank with a TV remote 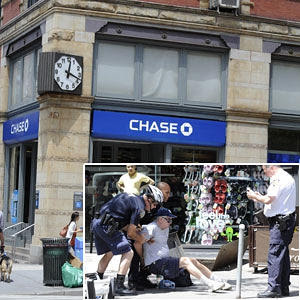 Hands up! Or I'll change the channel!

A trembling homeless man sent an Upper West Side bank into turmoil yesterday -- brandishing an old television remote control, demanding money and claiming he had a bomb.

The clumsy attempted bank robbery sent employees of the Chase bank at Columbus Avenue and 72nd Street scurrying to the building's roof, terrified the remote control was hooked up to an explosive device and that the place was going to blow up. 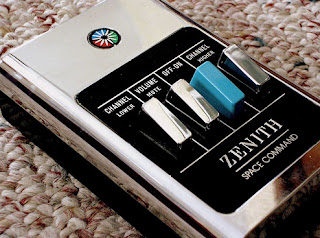 But accused bank bandit Edward Callahan, 55, was unarmed -- except for the remote and a water bottle.

He was quickly apprehended as he loped along Columbus Avenue just two storefronts away.

"It was funny, because he was an old guy," noted Teresa Sosa, 42, who works at Gotham Food, across the street from where Callahan was surrounded by a crowd of cops and arrested.

Not so funny for the Chase staff and customers, though.

According to witnesses and law-enforcement sources, Callahan lingered by the ATMs at the entrance, and asked first to see the manager.

When she came out, he said, "This is a robbery," pulled out an ancient-looking TV remote, and announced he had a bomb.

"Everybody out of the bank!" one witness said he shouted.

Customers ran out the front door. Employees triggered a hidden alarm and dashed up to the roof, where one woman could be seen crying in terror.

The manager had just handed Callahan a black bag -- it's not clear what the contents were -- when cops ran in the front door, and Callahan ran out the back, sources said.

"He stopped in his tracks and started shaking like he had a seizure," noted a barista at a nearby coffee shop who witnessed the arrest.

Callahan was awaiting charges at the 20th Precinct station house last night.
Posted by Palmoni at 8:27 AM