Bernanke to embark on QE 2? 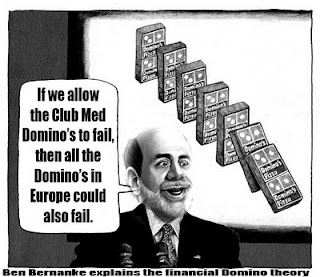 Ben Bernanke needs fresh monetary blitz as US recovery falters ... Federal Reserve chairman Ben Bernanke is waging an epochal battle behind the scenes for control of US monetary policy, struggling to overcome resistance from regional Fed hawks for further possible stimulus to prevent a deflationary spiral. ... Fed watchers say Mr. Bernanke and his close allies at the Board in Washington are worried by signs that the US recovery is running out of steam. The ECRI leading indicator published by the Economic Cycle Research Institute has collapsed to a 45-week low of -5.7 in the most precipitous slide for half a century. Such a reading typically portends contraction within three months or so. Key members of the five-man Board are quietly mulling a fresh burst of asset purchases, if necessary by pushing the Fed's balance sheet from $2.4 trillion (£1.6 trillion) to uncharted levels of $5 trillion. But they are certain to face intense scepticism from regional hardliners. The dispute has echoes of the early 1930s when the Chicago Fed stymied rescue efforts. – UK Telegraph
Posted by Palmoni at 7:25 AM

But what about the V-shaped recovery?

Just wait until this QE2 kicks in, then you'll have your V-shaped recovery (in nominal stock prices only).