All of these names have already corrected, and with only 300,000 new homes reported today--how tough will comps be next year?

All the bad news should already be priced into these names.

And you know the stocks are buys. You had this article out telling you that housing was going to hell, when they already had lunch with Satan!

Meanwhile, vacant land is being gobbled up by those with deep pockets: 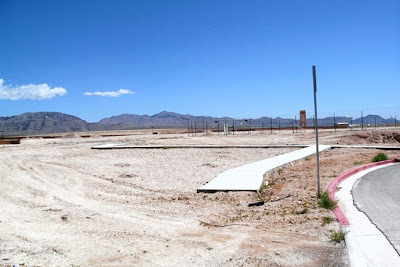 WSJ
Some of the savviest investors on Wall Street, including some who made billions on the housing bust, now are snapping up barren plots of land in places like Las Vegas and Phoenix.

Hedge fund Paulson & Co., which made a fortune wagering that the housing market was overvalued three years ago, is now making a bet that land is undervalued and that it can profit from reselling lots to home builders. The firm is bidding on some 8,000 residential lots in Arizona, Colorado and Nevada owned by home builder Tousa Inc., according to people familiar with the matter. Tousa has been operating under bankruptcy protection.

In the rocky suburbs of Las Vegas, meanwhile, Angelo, Gordon & Co. recently paid $35 million for land parcels zoned for about 2,500 residential lots. That is roughly half the amount the former owner sank into the property for roads, sewers and other infrastructure alone. At the same time, land investor SunCal Cos. is working with firms like D.E. Shaw & Co. to close a dozen land deals in Arizona and California.
Posted by Palmoni at 12:36 PM

why do not you buy the builders yourself?

cool, please guidance so that I can create a blog like yours