"The wimps in the White House" 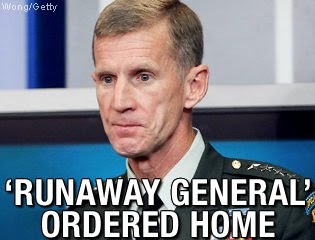 According to General McChrystal, who was called back from Afghanistan to get fired by Obama after the leaking of his interview in Rolling Stone, he succeeded (besides bribing warlords)

"by never taking his eye off the real enemy: The wimps in the White House."

WSJ
Watan Risk Management officials told House investigators the company pays between $1,000 and $10,000 a month to nearly every Afghan governor, police chief and local military commander whose territory the company traverses.
Posted by Palmoni at 8:28 AM