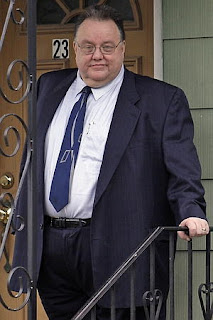 A married, obese former president of a Port Authority union admitted yesterday in court to embezzling nearly $300,000 in member dues and using the cash for tawdry hook-ups with prostitutes, casino trips and lavish meals, sources told The Post.

Daniel Hughes, 49, who resigned in disgrace from the local Field Supervisor Association, admitted to Judge Eric Vitaliano in Brooklyn federal court that he stole the cash from January 2005 to last December -- bankrupting the account for his 250 members.

"This PA employee took advantage of his position as a president of a union and abused it in a calculated and egregious manner," said PA Inspector General Robert Van Etten.
Posted by Palmoni at 9:08 AM

A chick must be mentally ill to want to screww jaba the hut for money or not-- and say I read this from bloomberg: Leading Economic Index in U.S. Rises in Sign of Lasting Rebound

Palmoni, when do you think the market will panic over the GOM?