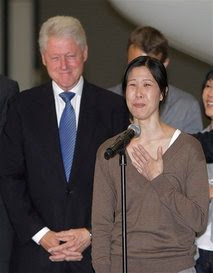 Nearly a year after the former president negotiated the release of two Current TV reporters in North Korea, one of them, Laura Ling, has honored Clinton by naming her new baby after him.

According to People's Cynthia Wang, Ling gave birth to a girl, Li Jefferson Clayton, on Wednesday night in Burbank, Calif. (The father is Ling's husband, financial analyst Iain Clayton.) The baby's first name, Li, is a nod to Ling's sister Lisa, a former co-host of "The View," and Jefferson is Clinton's middle name.

Ling is still tight with the former prez, telling People that Clinton had followed up with her. "He has checked in on me several times to see how I'm doing and has been so concerned and caring, " Ling said. "He's such a wonderful human being."

Another happy ending with Clinton!
Posted by Palmoni at 3:27 PM

Because when you learn
You'll know what makes the world turn

Because when you learn
You'll know what makes the world turn