Stephen Freidman's lies on his purchase of Goldman Sachs stock 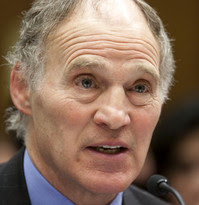 A couple of weeks ago, we had this story:

WASHINGTON (Dow Jones) -- Senior Federal Reserve officials had "misgivings" about granting former Goldman Sachs Group Inc. (GS: 131.7001, -2.2599, -1.69%) executive Stephen Friedman a waiver to own company stock while serving as chairman of the Federal Reserve Bank of New York, according to a pair of lawmakers following a review of internal central bank documents.

Reps. Edolphus Towns (D., N.Y.) and Stephen Lynch (D., Mass.) issued a joint statement Saturday that they plan to hold a hearing featuring Friedman and Fed officials regarding "how he was permitted to make windfall profits by trading stock in a company he had a role in regulating."

Towns, who chairs the House Committee on Oversight and Government Reform, and Lynch said the decision was made after a review of documents turned over by the Fed following a request from lawmakers last month.

"Mr. Friedman's purchase of Goldman stock a month after the New York Fed directed AIG to pay its counterparties, including Goldman, at par, and three months before AIG's $13 billion payment to Goldman was officially announced to the public also raises conflict of interest questions," the joint statement said.
------------------------
'Here are the documents regarding AIG, the bailout, Geithner, Freidman etc, and check out the emails about Freidman, Goldman Sachs buddie, who bought shares in Goldman through a waiver loophole that wasn't a loophole.

Go through pages 18-26
(page 23)
On the notion of owning shares as both a Goldman director and a NY Fed board chairman:
"I see no conflict whatsoevcr in owning shares... I followed the rules at the Fed ... I followed the rules at Goldman Sachs ... I don't personally observe any conflict." (We also may want to say in a paraphrased way that Friedman checked with lawyers at Goldman Sachs about his desire to buy shares late last year - and in January - and that they gave him the green light, but that he did not directly check with the NY Fed, leaving that to Goldman's lawyers if it seemed appropriate.)

And then, we had this story about the so-called "waiver."

The New York Fed sought a waiver from the Federal Reserve Board in September 2008 so that Friedman could keep his position there. Michele Davis, a spokeswoman for Friedman, says New York Fed general counsel Tom Baxter told Friedman that the rules were in abeyance while the waiver was pending.

“Therefore, Mr. Friedman’s purchases of Goldman Sachs stock were perfectly legal,” she says. The waiver was granted in January 2009.

Jerry Jordan, a former president of the Cleveland Fed, says the section of the Federal Reserve Act barring Friedman from owning bank stock or buying new shares could not be waived. “It was not allowed,” he says. “You can’t get permission to violate the law.”

Goldman Sachs’s ties to the New York Fed pose another potential conflict for Friedman, says James Cox, a professor at Duke University School of Law. Goldman was a prime beneficiary of the New York Fed-engineered bailout of American International Group Inc.’s bank counterparties, receiving, by its own count, $12.9 billion for the credit protection it held on mortgage- related securities. That figure was not publicly disclosed by AIG until March 2009 -- after Friedman had bought his shares.

“It raises at the least an eyebrow in terms of what he knew about those payments,” Cox says.

New York Fed spokesman Jack Gutt responds: “Friedman had no involvement in nor was he provided with confidential information related to the New York Fed’s negotiation with any AIG counterparties.”

Then, you just need to sync up your computer with your GPS unit to add it.
Seeley's writing is superb as always, switching between characters and plots effortlessly, and quickly
establishing connections between characters to catch new readers up to speed.
Here, we take a look at three possible ways to use your Zune with your Mac computer.

I was curious if you ever thought of changing the structure of your blog?
Its very well written; I love what youve got to
say. But maybe you ccould a little more in the way of content so people could connect with it better.
Youve got an awful lot of text for only having 1 or 2 images.

Maybe you could space it out better?