Pimco loads up on Treasuries 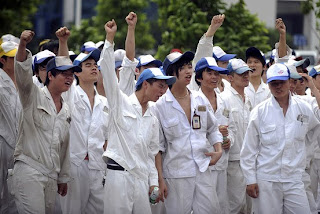 I guess they think that there won't be any wage inflation from China....and the peasants don't deserve a living wage:

Pimco had been the biggest and most vocal of a large group of Treasury bears, predicting that Treasury prices would fall, and yields rise, as the U.S. economy strengthens and the government borrowing binge continued...

Pimco on Wednesday shifted its views on Treasurys to be more in line with BlackRock's. The capitulation by Mr. Gross and Pimco, which has some $1 trillion in assets under management, is significant because it is among the most influential players in the market. Pimco has enough money to move the market and investors follow its opinions closely. Mr. Gross and his Pimco colleagues regularly appear on television and release monthly newsletters espousing their views.
Posted by Palmoni at 9:14 AM