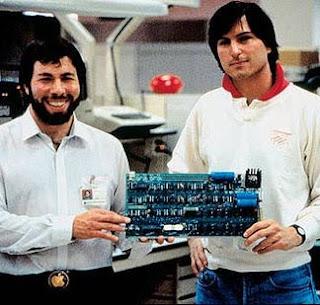 Pahrump, Nevada (CNN) -- Ron Wayne is usually just another gambler at the Nugget Hotel & Casino in Nevada. He comes here a couple of days a week to try his luck on the video poker machine. But on this trip, he drew some curious onlookers, as he was escorted by a CNN camera crew. A gift-shop worker asked him if he's famous.

"Well, I'm one of the founders of Apple Computer," Wayne responded.

Wayne, 76, is used to the puzzled looks. He said people assume that he must be living in a mansion.

"I'm living off my Social Security and I do a modest trade in collectors' stamps and coins," he said.

The irony of being inside a casino is not lost on Wayne. After all, if his short-lived career at Apple had gone differently, he would be holding a different kind of winnings: 10 percent of Apple's stock.

Today, that stock would be worth $22 billion.

"What can I say? You make a decision based on your understanding of the circumstances, and you live with it," he said.

And when they are 76, you'll see them in the casino. But unlike Ron Wayne, who doesn't begrudge his sale of AAPL, they'll blame someone else for their misfortune!!
Posted by Palmoni at 1:54 PM

We crashing, now what?

Tell that to the Japanese investor who have a 20 yr -75% return.

Yeah, tell 'em how stocks have to go up. That poor Jap pensioner who put away 100k in 1990 now looks at a meager 25k AFTER 20 years of bullishness for retirement.

You are truly clueless.

The japanese investor had a few chances between 1990 and and 2010 to lock in some profits. Nobody, is advocating hold and forget.

I don't know what you're point is-except, IT NEVER GOOD TIME TO BUY-Stock MARKET FOR SUCKERS. But sometimes it is a good time, and Palomoni knows this-and he knows their is always RISK-we know that -I knew that when i bought some DOW last year at 17 and sold half at 31. but if i listened to you--you would have given me a BOO! Bear scare--

we get it, whydibuy --you think the stock market is for fools, that it will go down and down,--

-my DOW went down to the 14's for a while after I bought it--it happens,--realize your risk when u buy! which is why I don't use money to buy stocks i know i will soon need--I can wait--good thing--

and I will wait, FOR C TO PASS 5
BAC TO PASS 20--WILL IT EVER HAPPEN? or NEVER happen? What's your GUESS? NEVER?

SHOULD I SELL ALL OF IT NOW, WHYDIBUY?

--ps--what the hell, is going on WITH CSCO? I did make a mistake of buying it at 27--which went against my rule of not buying on bull days/52 week high points--oh well, --should i hold? or sell and hang my head in shame?

Darn, I can't do this because I'm short on the cash flow, AW Shucks

sorry for the spelling/typo errors above --I wrote it on the rush rush--i will take more time, and double check before posting in the future