Oprah sees herself in Gabourey Sidibe 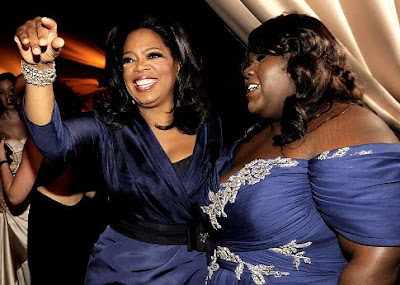 Oprah told People.com that she sees herself in Sidibe.

"This whole roller coaster that happens to you when you're passionate about something – she wasn't even thinking of being an actress; she just auditioned," Oprah said.

"And now here she is, being nominated alongside Meryl Streep, who is the greatest actress in the world, with Sean Penn reading her name. Only in America."

Oprah said she asked to present Sidibe as a nominee at the Oscars on Sunday because she believes they have so much in common, but Sidibe had no idea Oprah would be giving her introduction. During Oprah's speech, she called the 26-year-old "a true American Cinderella on the threshold of a brilliant new career," adding, "'Precious' is but the first of many adjectives coming your way – and they are all great."
Posted by Palmoni at 8:14 AM