SocGen's taxpayer bailout was another backdoor bailout of Goldman Sachs 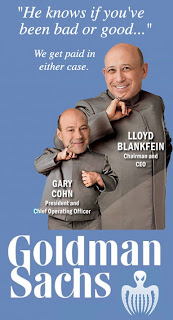 NYT
Through Société Générale, Goldman was also able to buy more insurance on mortgage securities from A.I.G., according to a former A.I.G. executive with direct knowledge of the deals. A spokesman for Société Générale declined to comment.


It is unclear how much Goldman bought through the French bank, but A.I.G. documents show that Goldman was involved in pricing half of Société Générale’s $18.6 billion in trades with A.I.G. and that the insurer’s executives believed that Goldman pressed Société Générale to also demand payments.

Finally, the New York Times comes thru with what was known here. Goldman had over $2.5 billion of Deutsche Bank's CDO bailout, and they were behind half of SocGen's bailout.

Meaning the biggest beneficiary of the AIG bailout was Goldman Sachs, and not SocGen. The bailouts of SocGen and Deutsche Bank were more back door bailouts of Goldman, who took it almost $13 billion in the front door, and billions and billions more in the back.

What else is new?

Corrigan, in the Senate hearing the other day, said that Goldman didn't really need a bailout. Oh really?

They double teamed him!
Posted by Palmoni at 4:54 PM