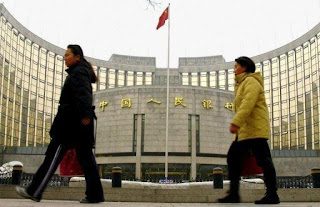 WSJ
BEIJING -- China's central bank moved Friday to soak up more funds from the financial system, raising the share of deposits banks must hold on reserve in an attempt to slow rapid credit growth that has raised concern about inflation and asset bubbles.

The People's Bank of China said it will raise the reserve-requirement ratio for banks by half a percentage point from Feb. 25, for the second increase this year. That will make the standard for major banks to keep 16.5% of their deposits on reserve, though the specific rate can vary for each bank. The move comes exactly a month after the central bank's first hike in the ratio, and after authorities have repeatedly leaned on banks to restrain their lending.
------
Wall Street will now come out with the "What if China slows/rolls over" story because of a little Chinese prudence--and they hit commodities.

Everything on Wall Street is a second derivative. Clinton goes into the hospital for stents, so today Wall Street will buy oatmeal.

Should we take this opportunity to buy some gold?
What do you think of HL and AA?