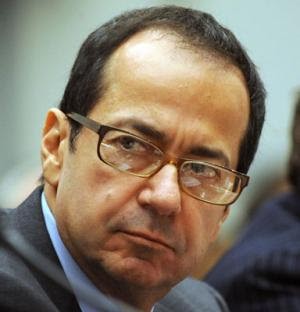 Considering this, hedge fund king John Paulson’s role in Greece deserves far more scrutiny. I wrote about this last week, pointing out that they shared the same vulture flight pattern in Greece, but at the time did not realize that Paulson and Goldman actually partnered in executing massive and profitable bets against the subprime market. Are they doing the same with Greece?

News of Paulson’s fund taking large positions against Greek debt has barely risen above rumor in the English-language press, despite this article in a Greek daily, which says that Paulson is “orchestrating the pressure on Greek government bonds and the Euro,” and reports that Paulson has a team of 20-30 traders focused on Greece

A research firm is now calling Paulson the George Soros of derivatives markets, where the bulk of speculation against European debt and the Euro is happening; the Telegraph says that so far “no hedge fund has put its head above the parapet in this destructive trade,” but the rumor is that Paulson is behind it.

If Paulson is the hedge fund king behind the parapet, as rumored in English and reported in Greek, then it would seem fairly likely that Paulson and Goldman partnered — colluded? — to build profitable short positions against Greek debt. That Goldman was shepherding hedge fund client Paulson around Athens in recent weeks would seem to suggest that the bank and hedge fund are working together in Greece.
-----------
Posted by Palmoni at 6:57 AM