Give Goldman $300 million in fees, and they'll hide Greece's debt! 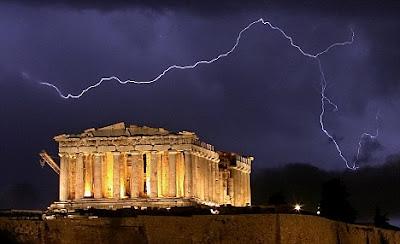 NYT
Even as the crisis was nearing the flashpoint, banks were searching for ways to help Greece forestall the day of reckoning. In early November — three months before Athens became the epicenter of global financial anxiety — a team from Goldman Sachs arrived in the ancient city with a very modern proposition for a government struggling to pay its bills, according to two people who were briefed on the meeting.

The bankers, led by Goldman’s president, Gary D. Cohn, held out a financing instrument that would have pushed debt from Greece’s health care system far into the future, much as when strapped homeowners take out second mortgages to pay off their credit cards.

It had worked before. In 2001, just after Greece was admitted to Europe’s monetary union, Goldman helped the government quietly borrow billions, people familiar with the transaction said. That deal, hidden from public view because it was treated as a currency trade rather than a loan, helped Athens to meet Europe’s deficit rules while continuing to spend beyond its means.

Wall Street did not create Europe’s debt problem. But bankers enabled Greece and others to borrow beyond their means, in deals that were perfectly legal. Few rules govern how nations can borrow the money they need for expenses like the military and health care. The market for sovereign debt — the Wall Street term for loans to governments — is as unfettered as it is vast...

While Greece did not take advantage of Goldman’s proposal in November 2009, it had paid the bank about $300 million in fees for arranging the 2001 transaction, according to several bankers familiar with the deal.
Posted by Palmoni at 9:59 AM