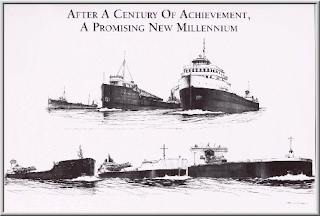 In 1932, during the Great Depression only 3.9 million tons of iron ore were shipped.

Finally a better sign on steel demand as evidenced on the Great Lakes.

It's not just demand from China!
Posted by Palmoni at 11:35 AM

Robert Kiyosaki says Dow 5000 this year. What do you think?