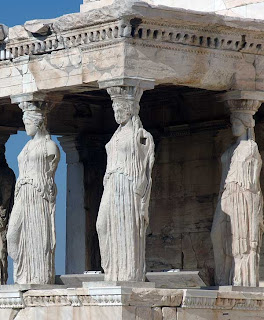 Deutsche Bank executed currency swaps on behalf of Portugal between 1998 and 2003, according to spokesman Roland Weichert. Mr. Weichert said Deutsche Bank's business with Portugal included "completely normal currency swaps" and other business activity, which he declined to discuss in detail. The currency swaps on behalf of Portugal were within the "framework of sovereign-debt management," Mr. Weichert said. The trades weren't intended to hide Portugal's national debt position, he said.

The Portuguese finance ministry declined to comment on whether Portugal has used currency swaps such as those used by Greece, but said Portugal only uses financial instruments that comply with EU rules....

(But check out the details of one of Goldman's "swaps.")

In 2001, Goldman and Greece came up with a now-controversial solution: a new off-market swap. It agreed in the future to convert yen and dollars into euros at an artificially favorable rate.

Greece could use that rate when it recorded its debt in the European accounts—pushing down the country's reported debt load by more than €2 billion, according to people familiar with the matter.

In exchange for the good deal on rates, Greece had to pay Goldman. The amount wasn't revealed. A payment would count against Greece's deficit, so Goldman and Greece came up with another twist. Goldman effectively loaned Greece the money for the payment, and Greece repaid that loan over time. But the two sides structured the loan as another kind of swap. Treated as a swap, the deal didn't add to Greece's debt under EU rules...

Gikas Hardevoulis, a former advisor to the then-prime minister of Greece, said the trade should not have been done. "It was done to dress up the debt figures by some smart idiot in the finance ministry" he said. 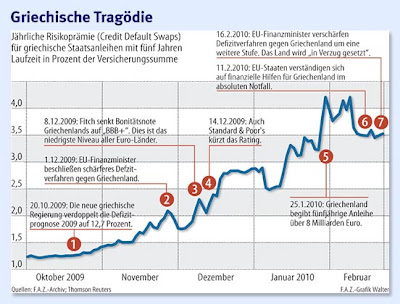 And who is on the hook for Greece's CDS?

London investment banker named as additional CDS seller the American insurer AIG. Had to be nationalized in the financial crisis, because he had sold default insurance on U.S. mortgage bonds. The charges were to collapse once the largest insurer in the world. Before the financial crisis, AIG is said to have assured a higher level of credit risk states. If there were still major insurance positions in Greece, then the American government would also have a strong interest in preventing a default in the country.

Last week, Ron Paul said  the Fed may be secretly bailing out Greece:

"Is it possible that our Federal Reserve has had some hand in bailing out Greece?  The fact is, we don’t know, and current laws exempt agreements between the Fed and foreign central banks from disclosure or audit."

Now that seems not so far-fetched.
Posted by Palmoni at 7:31 AM