Time to go long the Euro 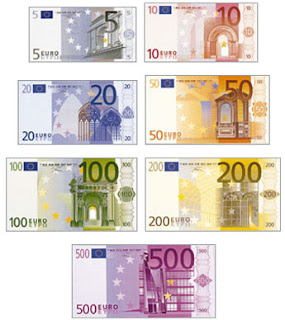 Look at this article in the WSJ.  All the smart money boys have gotten together, and decided to raid the euro:

WSJ
Some heavyweight hedge funds have launched large bearish bets against the euro in moves that are reminiscent of the trading action at the height of the U.S. financial crisis.

The big bets are emerging amid gatherings such as an exclusive "idea dinner" earlier this month that included hedge-fund titans SAC Capital Advisors LP and Soros Fund Management LLC. During the dinner, hosted by a boutique investment bank at a private townhouse in Manhattan, a small group of all-star hedge-fund managers argued that the euro is likely to fall to "parity"—or equal on an exchange basis—with the dollar, people close to the situation say.

The currency wagers signal that big financial players spot a rare trading opening driven by broader market gyrations. The euro, which traded at $1.51 in December, now trades around $1.35. With traders using leverage—often borrowing 20 times the size of their bet, accentuating gains and losses—a euro move to $1 could represent a career trade. If investors put up $5 million to make a $100 million trade, a 5% price move in the right direction doubles their initial investment.

It is impossible to calculate the precise effect of the elite traders' bearish bets, but they have added to the selling pressure on the currency—and thus to the pressure on the European Union to stem the Greek debt crisis.....

On Jan. 28 and 29, analysts from Goldman Sachs Group Inc. took a group of investors on a field trip to meet with banks in Greece. The group included representatives from about a dozen different money managers, say attendees, including Chicago hedge-fund giant Citadel Investment Group, the New York hedge fund Eton Park Capital Management, and Paulson, which sent two employees, say people who were there. Eton Park declined to comment.

During meetings with the Greek deputy finance minister and executives from the National Bank of Greece, among other banks, some investors raised tough questions about the state of the country's economy, according to these people.
---------------- 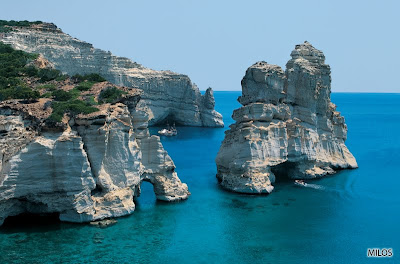 Thus the stories of Greece. Oh my. Make Greece falter, then make Spain, then Portugal, and then get Goldman Sachs to help pimp the trade, and the swaps will widen on the countries currency, and the euro will puke.

Or so they say. Those who also predicted the worldwide Great Depression II!

But the euro has puked already! So now it's heading to parity?

If the WSJ already has the story, isn't it already in prices?

And doesn't it mean they have already laid out their bets? At 20-1 leverage, and much higher?

And if this is activity that is reminiscent of the peak in the financial crisis, doesn't that mean we are ready for another reversal of fortune? 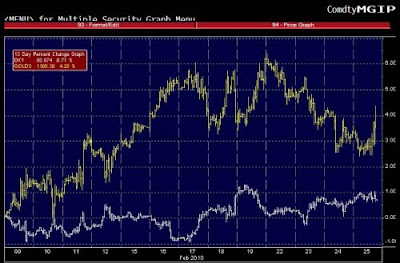 Look at the action in gold. Hasn't that linkage been broken? How about a chart?

So go short the euro. Go and pound it. Go hit it. Go leverage yourself to the gills and try and bust it. Go spread you stories. In fact, why dion't you go to hell while you're at it!

Because if you follow their footsteps, you'll get burned!

Because these schysters need to cover and that's why they're advertising the trade!!
Posted by Palmoni at 11:19 PM