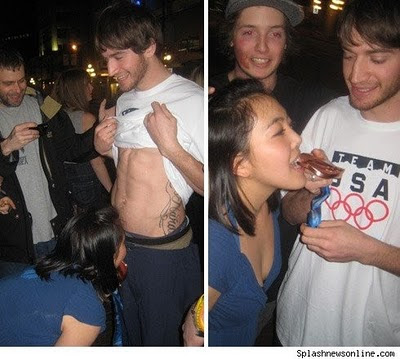 Scotty Lago gets kicked out of the Olympic Games for this candid shot of an athlete having fun.

Fumer c'est etre l'esclave du tabac = Smoking is like being tobacco's slave
But France comes out with a new anti-smoking slogan, with the above picture, and yet, its ok? You can read about the ad campaign here at the NYT...

PARIS — A new French antismoking ad aimed at the young that plays off a pornographic stereotype has gotten more attention than even its creators intended, with critics suggesting that it offends common decency and creates a false analogy between oral sex and smoking.

It looks like France and the IOC have adopted Wall Street's double standard!
Posted by Palmoni at 5:11 PM

Looks better today--it was so boring I hardly was doing any trades.

Economic numbers are also exaggerating the weakness because of the cold weather that we had.