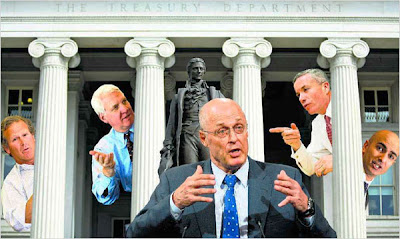 Remember October 2008? When Paulson, and his cronies put together the TARP?

BusinessWeek:
Now comes the hard part: getting the Mother of All Buyout Funds up and running.

Treasury officials have made clear they want to do that as soon as possible, and have told congressional leaders and Wall Street executives that they will conduct the first auction to buy assets within four weeks. The work needed to accomplish that is well under way, by a team of Treasury officials led by Ed Forst, a Goldman Sachs (GS) alumnus who left the firm this summer to become a senior administrator at Harvard University. In late September, Paulson asked him to come to Treasury to work on the bailout program. Forst, who is on a temporary contract, began to outline the plans for implementation even as Congress wrangled over the details.

Look at the Goldman memo mentioning his promotion. Is the stint at Treasury even mentioned? (He's pointing the finger at Paulson in the photo above) 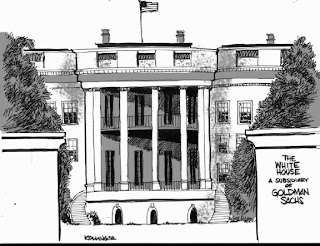 We are pleased to announce that Edward C. Forst, currently our senior strategy officer and member of the Management Committee and Business Practices Committee, will become co-head of the Investment Management Division (IMD). Ed, together with Tim O’Neill, will lead our efforts to grow Goldman Sachs Asset Management and Private Wealth Management businesses, which are among the largest in the world.

Ed has been the senior strategy officer since rejoining the firm in 2009 after serving for one year as Harvard University’s first executive vice president and principal operating officer. Before that, Ed was head of IMD. (not a mention of his consultant job at Treasury!)

Ed joined the firm in 1994 in Capital Markets of which he subsequently became co-head. He served as chief of staff to both the Equities and Fixed Income, Currencies and Commodities (FICC) divisions and also served as the co-head of the Global Credit businesses in FICC. Ed joined the Management Committee in 2004. From 2004 to 2007, he was the firm’s chief administrative officer, based in New York and London, and co-headed, with David Viniar, Operations, Technology, Finance and Services. Ed is a former chairman of both the Firmwide Capital Committee and the Business Practices Committee.

Please join us in congratulating Ed and wishing him continued success in his new role.

Well your article helped me terribly much in my college assignment. Hats afar to you enter, choice look audacious in the direction of more interdependent articles soon as its sole of my choice issue to read.

Not sure where to post this but I wanted to ask if anyone has heard of National Clicks?

Can someone help me find it?

Overheard some co-workers talking about it all week but didn't have time to ask so I thought I would post it here to see if someone could help me out.

Seems to be getting alot of buzz right now.

If you happen to be in wealth management firm – try getting through our doors with your needs, we will make sure that you will exit the same door hours after with clear financial solutions from us. We are here to help you achieve tranquillity of mind at night with your wealth and assets secured for generations to last. Welch & Forbes specializes in investment portfolio management, personal trust & fiduciary services, estate planning and administration, tax & custodial services among others. We are a team of financial and asset management experts and we understand what does financial well-being means. We are here to let you know that above all, we understand your needs to be financially well for your children and for your future generations.

Welch & Forbes in Burlington, Vermont is a company that offers private wealth management services even to the most high profile individuals of the society. With over 170 years of experience in this field, the stability of the company will never be questionable. With a total of $40 billion assets, you will never doubt the capacity of the company in terms of taking care of your inherited wealth. We value every customer that we have and we make sure to have the best experience with the services we’re giving them. Usually, we get to keep them for long terms. The average number of years that our clients stay with us is 22. That is how great Welch & Forbes is as a private wealth management.