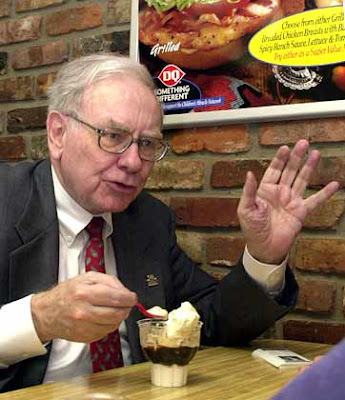 Cara Goldenberg, co-founder of Permian Investors Partners, wrote a letter to Buffett, and she touted this stock.

She was invited out to dinner with Warren because of it.

Salida Capital paid $1.68 million for dinner with  Warren at Smith & Wollensky. Thus the old master, must of liked her pick.

CEO Mike Pearson, formerly responsible for significant growth at McKinsey where he took the firm’s global healthcare practice from $150mm to $1.9 billion in less than ten years, has a reputation of meeting and exceeding ambitious internal targets. Valeant's growth has trumped sales forecasts every quarter since Pearson took the helm, because of his ability to leverage his distribution network to push through strong brands, both existing and acquired. 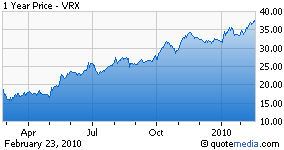 To illustrate this point, Pearson was in Australia in February 2009 purchasing an $8mm dermatology product. While in a local pharmacy to better understand the sales process for the potential acquisition, Pearson began asking a young man dressed in a Gecko costume about a vitamin formula that he was selling. The Gecko was in fact the CEO. The following day, Pearson purchased 100% of the Gecko’s company for $15,000 cash with no earn-out. For the ten months ending Dec-2009, Valeant generated ~$500,000 in sales from the Gecko’s product after expanding the sales base from 5 pharmacies to 100+ by year-end.
This example is being replicated on a larger scale many times over. Many strong local brands have neither the sales potential to attract large healthcare players, nor the management savvy, scale or distribution network to optimize sales on their own. Valeant will continue to roll-up these opportunities with 15% IRRs, assuming no sales growth (15% IRR purely from cost-cutting). Typically, Valeant buys these businesses for 1.0x sales or less (currently valued at 2.9x sales due to margin conversion). There is currently no ceiling to the growth this Company can generate over the coming few years.

To what extent is this a sector pick, as opposed to a pure bottom-up pick?
We are not particularly bullish on healthcare. We think Valeant will generate significant absolute returns in just about any market environment, and at the very least, will generate significant relative out-performance. The stock appears extremely undervalued with clear market dislocations, which should provide a sufficient margin of safety with a 1+ year time horizon.

How would you describe Valeant's competitive environment and its positioning?
For Valeant, the competitive landscape is rational and limited. Most of its branded generics or consumer cosmetic products have been well-entrenched for years, if not decades. The specialty pharma business has three drugs that have approached patent expiry, yet the Company will grow top-line by more than 20% organically despite declines from these drugs (<15% of 2010 sales).

Just as importantly, Valeant has had opportunities for cheap acquisitions by executing cash purchases in areas with less competition such as in Mexico and Australia. This enables the smaller, acquired companies to take advantage of Valeant’s economies of scale to reduce costs and leverage Valeant’s formidable distribution network; meanwhile, Valeant can take advantage of new geographical exposure to bring some of its other products into new markets. The opportunity exists because larger pharmaceutical companies mostly ignore the $2-$20mm branded generic space, simply because an acquisition of this size cannot move the needle. Meanwhile, Valeant might make 50-100 of these this year.

What are your thoughts on Valeant's valuation? How does its valuation compare to its peer group?
Valeant trades at 13x 2010, 9x 2011 and <4x our 2014 cash earnings estimate. The peer group typically is composed of pharma companies like Medicis, Endo, and Forest Labs. The group trades at around 11x 2010 earnings, but with little to no growth forecasted thereafter. We largely ignore relative valuation for Valeant given the significantly more sustainable business model, mid-teens ROIC, 25-40% top-line growth and 35-60% earnings growth.

What is the current sentiment on the stock? How does your view differ from the consensus?
Sentiment on Valeant is embarrassingly bearish, with just two ‘Buys,’ four ‘Holds’ and four ‘Sells.’ The market dislocation is abundantly clear and somewhat comical, if not slightly offensive, to management. The sell-side fails to understand the structural drivers behind the dramatic growth. Analysts that follow the stock do not appreciate the broad portfolio (most drugs between $3-$5mm) or the turnaround potential, and instead focus on the US Specialty pharma (<45% of the business).

As a result, 2008 EPS estimates for 2009 went from $0.64 when CEO Pearson joined in spring of 2008 to $2.13 today. We think $2.20 is more likely. 2010 estimates have increased from $0.64 in late 2008 to $2.53 today. We think $3.00 is more likely. The previous management team was comprised largely of scientists focused on developing drugs, as opposed to maximizing shareholder value. The result was spending large sums of money to market drugs where the addressable market was literally non-existent, and a complete absence of focus on the gems inside the portfolio. Pearson has completely overhauled the entire Valeant salesforce. It appears that analysts will continue to chase quarterly earnings higher and higher, while ignoring the structural drivers behind the impressive growth.

Does Valeant's management play a role in your position?
Management quality is the key pillar behind our investment philosophy. We invest behind management teams with proven track records and incentives that are aligned with investors.

We offer an analogy to explain why we invest behind management: Imagine you could assiduously turn over an infinite number of stones only to select the most extraordinary ten. Those ten stones represent your highest conviction equity investments as measured by valuation, market dislocation, business quality, margin of safety and, of course, management quality. Now imagine that each of those management teams are themselves working diligently to turn over an infinite number of stones in order to pick pennies off the ground for investors, pennies that most management teams unknowingly step over, kick to the side of the road (probably en route to a major sporting event that they have elected to sponsor directly out of distributable funds to shareholders). This analogy represents Permian’s philosophical edge: the compounded effect of our team out-hustling our competition to source the most overlooked and non-consensus investment ideas, and the management teams we choose, in turn, out-hustling their competition.

There are of course an infinite number of ways to cut the deck when it comes to investing, but we believe our approach is unique and allows for the construction of an exceptionally original portfolio with a highly asymmetric risk/return profile regardless of market direction.

What catalysts do you see that could move the stock?
Presuming the analyst community never awakens to the drivers behind the earnings power of the business, Valeant’s share price will likely continue to grow with earnings, with quarterly announcements serving as the primary catalysts. We are content with 35-50% share price growth per year for the next five years. BofA/Merrill Lynch is the only bulge bracket bank that covers the name. With a market cap of $3 billion, it is reasonable to assume that more (and hopefully better) sellside research analysts will initiate coverage.
Posted by Palmoni at 7:54 AM

Just took a look and found 3 different amounts for the Year, including the QTR just reported. These are the amounts shown: $3.07, $3.27, $3.14. I'll use the 2010 Guidance for now. I also noticed a post questioning the sale by HealthCore of 3MMshs, of the 10MMshs they held. They still own 7MMshs, and a check with mffais shows, what I consider a smart move, they took virtually their Initial Investment off the table...here: Initial $258,860,000, Sold $255,290,000, New Cost Basis=3,570,000 on 7MMshs. Who can argue with that? Plus they sold to the company, a Barrons quote: "The purchase from HealthCor was part of Valeant's long-running buyback program, says Pearson, which has proven a good use of capital."
I should also mention that the largest shareholder has near a quarter of their entire portfolio in VRX, this one:

Thoughts, the PE for TTM and Forward are half the Sector. Am I missing something.