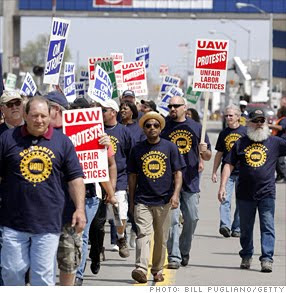 Feb. 24 (Bloomberg) -- Move over, investment bankers. The next victims of populist backlash are going to be state- and local-government workers.

As usual, it’s all about the numbers, except this time we’re not talking about dollars in a bonus check. No, this time it’s about numbers of jobs.

Businesses have fired 8.5 million people, or 7.4 percent of those on the payroll when employment peaked in December 2007. Local governments kept hiring through September 2008, and since then have fired 141,000 workers, less than 1 percent of the 14.6 million they had at the top, according to the U.S. Bureau of Labor Statistics......

Unlike the outrage provoked by Wall Street’s bonus babies, there’s no element of class warfare here. The hard-working men and women whose jobs, retirement savings and benefits have been whittled away in the recession won’t be too sympathetic to the men and women who have eight-hour days, overtime pay, guaranteed pensions and full health plans.

President Barack H. Obama signed three executive orders during a ceremony at the White House on January 30, 2009: Economy in Government Contracting, Nondisplacement of Qualified Workers under Service Contracts, and Notification of Employee Rights under Federal Law. The three executive orders focus on federal contractors, but the pro-labor slant of the President's action signals a dramatic shift in labor policy at the highest levels of the federal government. In announcing the executive orders, Mr. Obama said, "I ... believe that we have to reverse many of the policies towards organized labor that we've seen these last eight years, policies with which I've sharply disagreed. I do not view the labor movement as part of the problem, to me it's part of the solution...."

Yesterday, Obama told the Business RoundTable that he was "an ardent believer in the free market." In other words, he wasn't as Fox news intimated, (but not Bill O'Reilly) a socialist. 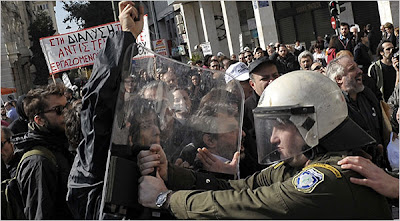 Greece is trying to get its fiscal house in order, but its met by work strikes and increasing anarchy.

Is Greece the Tip of the Iceberg? (Wells Fargo Securities)
Posted by Palmoni at 8:14 AM

Coaching is all the rage currently. All of us don't have managers in our agencies anymore, we now have coaches. [url=http://www.coachlinkjp.com/]コーチ 財布[/url],I was already moving in the route of coaching ahead of demographic exploration showed that this younger generations don't want bosses and supervisors, they desire coaches and also mentors. In case you are in a situation involving leading or creating other people inside your organization, [url=http://www.katespadesite.com/]ケイトスペード 財布 新作[/url],developing coaching skills is usually your greatest property.

The idea of training has leave the actual sports area. We kind of have a view of coaching as the care-free process everywhere everyone needs to be having plenty of fun, although this may not always the case.[url=http://www.oakleyautoretto.com/]オークリー ゴルフ[/url], While i do coaching workshops I will often start off them by requesting the questions from their sports emotions, "What brands a great instructor? micron "What brands a bad trainer? " While people list off of the attributes it is really obvious that the things that make bad and the good coaches in the sports arena is true in the place of work.

Good coaches give attention to skill and also team development and they also receive training to help these organizations using this type of. Why should our targets and support regarding coaches at work be just about any different? However coaching at work could, will not, fall short. [url=http://www.seebychloejap.com/]シーバイクロエ 財布 新作[/url],With regards to fails, in most cases for 1 of a pair of reasons: the actual coaching did not adhere to sound mentoring process and/or the coach didn't take responsibility for their role in achieving positive aspects.