The Govvie has your back!

And the big boys are back in the financials. Even Citi is getting taken down by Soros. I'l let someone else tell that story, because I gotta get trading.

And Bank of America? Looks like Paulson still loves this name.

Look at the chart. If the name wasn't BAC, wouldn't you say it was a breakout? Heck the March 16 calls are just .31 cents. If they can't hold this name at 15 for February option expiration, how much buying then, wants to go in this name?

Why not? Uncle Sam has your back.

(Speaking of breakouts and backs, look at this spec name, APWR which broke out yesterday. They promise jobs in Texas, and a wind farm, and China's government supposedly has their back. I'm long that too. So let me get in a quick pimp while I'm ranting!)

So banks are now not too big to fail? Yeh right. What chance is that to happen?

And all those bears that said the financials, would all roll over and die--Wait--didn't they say that was going to happen to the materials and the construction plays?

Wait--what happened to those numbers?  Kaboom!!!

And supposedly, those names are doing better because of earnings, and also because Obama stimulus money os eventually going to make it in the real economy.

Then doesn't that mean the beleaguered financials then are buys also?

Well, at least BAC is. After all, didn't they buy Merrill Lynch? And didn't Barclays just smoke numbers? And with all the investigation into BAC, don't you think that next quarter, they'll show the world what a resounding success the buy of Mother Merrill was?

Come on, even John Thain has gotten a new gig! Wall Street has a short memory!

Because we know that they aren't trying to destroy Greece's economy with tales of woe. 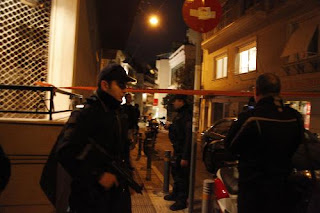 And if we get a couple more strategically placed bombs in the streets of Athens, it may even convince JPM and its pals at Goldman that they shouldn't try and take a country down.

Or at least, try and make some money off of panic they are trying to incite!
Posted by Palmoni at 8:12 AM

Do you think C can move or is worth a longer term bet?