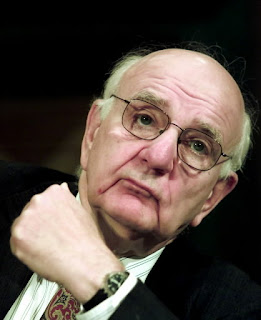 WSJ
Key senators are expected to scrap President Barack Obama's proposal to prohibit commercial banks from certain risky trading activities, people familiar with the matter said, a setback for the administration's bid to limit the size and scope of the largest U.S. banks.

The proposal, dubbed the "Volcker rule" after former Federal Reserve Chairman Paul Volcker, would have essentially prevented any commercial bank with federally insured deposits from owning a division that makes speculative bets with its own capital.
-----
And Geithner said that the banks need flexibility to do prop trading because the need to avoid impairing the Treasury market.

So it was the Treasury market that got us into trouble, not naked swaps on CDS!

So today, the bankers milquetoast, Ben Bernanke, will be up on the hill today, assuring and assuaging the street that he didn't really mean anything by the discount rate cut!

The markets have gone sideways for too long, and consumer confidence is dropping, so its time to kiss and make up!

The hill has a new villain anyway--Toyota!
Posted by Palmoni at 7:29 AM