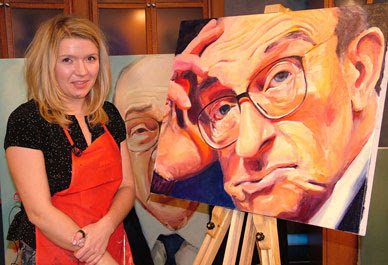 He aptly won it, since he was adjudged as the economist who contributed the most to blowing up the global economy.

Maybe someone will want to buy a painting of Greenspan again after this award!

Alan Greenspan (5,061 votes): As Chairman of the Federal Reserve System from 1987 to 2006, Alan Greenspan both led the over expansion of money and credit that created the bubble that burst and aggressively promoted the view that financial markets are naturally efficient and in no need of regulation.

Milton Friedman (3,349 votes): Friedman propagated the delusion, through his misunderstanding of the scientific method, that an economy can be accurately modeled using counterfactual propositions about its nature. This, together with his simplistic model of money, encouraged the development of fantasy-based theories of economics and finance that facilitated the Global Financial Collapse.

Larry Summers (3,023 votes): As US Secretary of the Treasury (formerly an economist at Harvard and the World Bank), Summers worked successfully for the repeal of the Glass-Steagall Act, which since the Great Crash of 1929 had kept deposit banking separate from casino banking. He also helped Greenspan and Wall Street torpedo efforts to regulate derivatives.
Posted by Palmoni at 5:15 PM