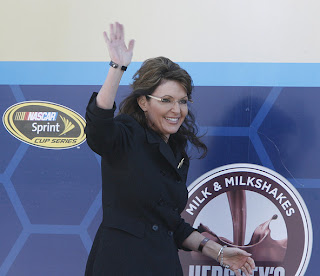 She said its another "kick in the gut" because of this line, "My dad's an accountant, and my mom's the former governor of Alaska."

She's upset? How about real life, where the TSA made a four year old disabled boy take off his leg braces?

Unfortunately, it's no joke. This happened to Bob Thomas, a 53-year-old officer in Camden's emergency crime suppression team, who was flying to Orlando in March with his wife, Leona, and their son, Ryan.

Ryan was taking his first flight, to Walt Disney World, for his fourth birthday.

The boy is developmentally delayed, one of the effects of being born 16 weeks prematurely. His ankles are malformed and his legs have low muscle tone. In March he was just starting to walk.

Mid-morning on March 19, his parents wheeled his stroller to the TSA security point, a couple of hours before their Southwest Airlines flight was to depart.

The boy's father broke down the stroller and put it on the conveyor belt as Leona Thomas walked Ryan through the metal detector.

The alarm went off.

The screener told them to take off the boy's braces.

The Thomases were dumbfounded. "I told them he can't walk without them on his own," Bob Thomas said.

here's an update on HUSA

go to yahoo finance and put in PMG.TO and you'll understand the HUSA story.

The well that is flowing is from the Candellila structure

Check out the report on HUSA here

Canacord is doing a dog and pony show on HUSA in Canada-so the story is getting out, and with oil discovered next door (PMG)you have the play w/HUSA

i've been watching HUSA like a hawk since your tout...great job! didn't get in at the $7 when you retouted but boy it's going gang busters.

is the target still the $14 touted from the report? or since you got the pop today it's time to get out?

The market cap is still so small, compared to the potential, especially if you start throwing some numbers around.

I've seen cash flow numbers a few years out depending on the success of the wellls, in excess of the current stock price here.

What does that mean? Really nothing because who can say how much oil they'll hit or not?

You can't. So it gets left to Wall Street's imagination, and the higher the stock goes, the more believers come on board.

It just takes time for a story to play out, so I'm just sitting.

do you have any suggestions in the under $5 and under $10 range?

btw...do you have a target for MGM?

HUSA breaking out to new highs

GMXR just hit a well and this one is easy to move can go to 13 easily, and they are out promoting

can you give a update on HUSA for those who haven't followed it?

I put something together on HUSA, but most of the news is already out there.

If I connect the dots to closely, someone will say I'm "hyping" it

on MGM look at what happened to General Growth--If those properties are now worth so much more than Wall Street said, what does that mean for MGM?

It means it is at a giveaway price also!

how can you like MGM when Goldman said to sell PENN?

geez the internet is always a tough crowd!

PENN is a local casino, MGM is not--and Goldman upgraded GET (Gaylord Entertainment) because they saw corportate travel increasing

MGM would benefit from that trend, PENN would not

Downgrading PENN & PNK to Sell given cyclical & structural issues
Regional casinos missed 4Q results as high unemployment levels are weighing on consumer gaming spend,
especially at the mid market, and cost cuts are largely done. Although the stocks are down 11% over the past
two weeks, we suspect there is more to go with an extended period of unemployment (GS Global ECS
Research expects it to peak at 10.5% in 2011). Regionals target mid market consumers and seem vulnerable
to sustained core customer weakness. At the same time, with state budget gaps still high 15 new regional
casinos are planned for development and we could see more. Gaming in NA seems to have reached some
level of saturation/equilibrium so more capacity could lead to cannibalization. Regional operators are “well
managed” but they won’t be able to offset the double impact of sustained consumer weakness and more
supply. At a minimum, we think these shares will underperform the rest of our group. We are downgrading
Penn to CL-Sell and Pinnacle to Sell based on potential cannibalization and valuation. Penn goes to CL-Sell
given fewer exogenous events that could create near-term upside and broad structural issue exposure. We
maintain a Neutral rating on Ameristar as an 11% FCF yield, debt pay-down plan, and low valuation offset our
cannibalization concerns. The key near-term risk is mixed data on the consumer (better retail sales) and the
1Q bar is set low. Specific to Penn, they are very good at operations and have a solid balance sheet ($1.8 bn
of liquidity), and to Pinnacle, they could hire a new CEO who the market views positively.
----------------

I touted that last week! I said you could buy the March 15 calls at .52 it was in the comments

and if you missed that look at the Feb 38 at ABX at .51 that's a worthwhile shot

heck a bomb just went off in AThens at JPM--do you suspect those bankers that are trying to cause Greece to go to hell in a handbasket with their purchase of swaps etc are getting some retaliation?