Bankers stealing millions in fees from the disabled and the ederly 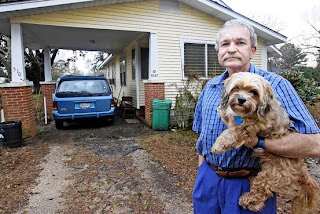 Does it never end? Look at this WSJ expose on the bankers:

The Treasury Department is seeking to plug a loophole that has allowed banks to drain millions of dollars in fees from the Social Security benefits of elderly and disabled customers.

At issue are the accounts of customers whose Social Security benefits are deposited directly from the government to banks. When banks receive garnishment orders from creditors, many freeze the customers' accounts, even when accounts contain only Social Security.

Federal law bars creditors from taking Social Security to recover a debt, but when they send garnishment orders seeking money in people's bank accounts, the rules currently don't specify what banks should do.

The predicament has hurt people like Floyd Morell, a church musician in Loxley, Ala., whose only income is $831 a month in Social Security. He has been unable to touch his benefits since Jan. 4, when his bank froze his account after receiving a garnishment order.

Freezing accounts can be lucrative for banks: Such moves trigger overdraft, bounced-check and other fees. In recent years, advocates for seniors say, banks have withdrawn billions in fees from Social Security and disability benefits, and other deposits that are exempt from creditors, including pensions, payments to disabled veterans, and survivors' benefits for children.

Customers can file an exemption claim and get the money released, but the process can take weeks or months, and banks generally keep some or all of the fees.

Banks say it isn't their job to see if the money is exempt, and that the benefits often are commingled with nonexempt money. "Banks have no choice but to put a hold on the account," says Mark Tenhundfeld, a senior vice president at the American Bankers Association.

Some banks, however, return garnishment orders if the only money in an account is from Social Security, and others, including US Bancorp, do so when there isn't enough money in the account to cover the fee the bank would charge the customer for freezing it. 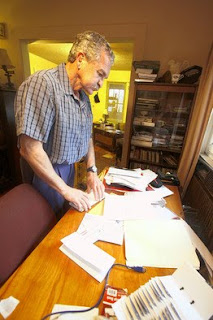 New Treasury rules are expected to resolve the issue by requiring banks that receive garnishment orders to check the customers' accounts to see if they received a direct deposit of Social Security or Veterans benefits within the past 45 days. If so, the bank must take steps to protect the exempt funds, such as not freezing a certain amount, such as $2,200.

"This will ensure that low-income recipients have basic living expenses," says Margot Saunders, a lawyer with the National Consumer Law Center, which pushed for the new protections.

A Treasury spokesman declined to comment. In a Dec. 31, 2009. letter to the House and Senate Appropriations Committees, the Treasury said that eight federal agencies had commented on the rules, and that "we have resolved all but one significant legal issue." The letter said the Treasury expected to publish the proposed rules "in approximately two weeks."

The move would protect people like Mr. Morell, the Alabama musician. Radiation for neck cancer destroyed the bone in his jaw, and when Medicaid didn't reimburse his oral surgeon, the doctor sued Mr. Morell for $5,997. Without access to his benefits, he has been unable to buy food for his dog and cat, or refill the prescriptions for medications he takes for prostate cancer and high blood pressure. His utility has threatened to cut off his service.

Unaware that his Regions Bank account was frozen, Mr. Morell used his debit card to pay for gas and groceries, triggering four "not-sufficient fund" fees. Including a $100 fee for freezing his account, the bank fees so far have exceeded $300, and continue to grow with negative balance fees.

Mr. Morell filed an exemption claim with the court, but his account remains frozen until a local judge processes his claim. A spokesman for Regions says if the court determines the money is exempt, it will unfreeze the account and reimburse the fees. "We support any efforts to lessen the financial impact of garnishments on customers," the spokesman says.

Mr. Morell says that much of his February benefits will go to pay the late fees and returned-check charges from his credit-card company and others.

"Once you get behind, it's hard to dig yourself out," he says. A visiting nurse brought him pet food, and a charity helped pay his utility bill.

Banks have been concerned about provisions that could restrict their ability to take overdraft fees and fees they charge in freezing accounts from Social Security, an issue in several private lawsuits with customers, according to people familiar with the matter....
Posted by Palmoni at 10:02 PM