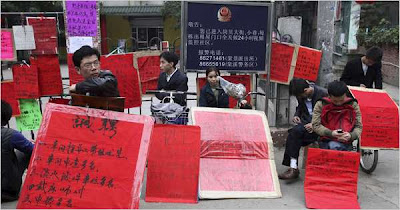 Factory wages have risen as much as 20 percent in recent months.

Telemarketers are turning away potential customers because recruiters have fully booked them to cold-call people and offer them jobs.

Some manufacturers, already weeks behind schedule because they can’t find enough workers, are closing down production lines and considering raising prices. Such increases would most likely drive up the prices American consumers pay for all sorts of Chinese-made goods.
----------------

But Jim Chanos will tell you China is Dubai 1000 times!
Posted by Palmoni at 8:28 AM

No way china is dubai...the thing with china is the world depends on them for goods. I do believe dubai is in trouble but they should be able to get out easy under sovergien wealth.