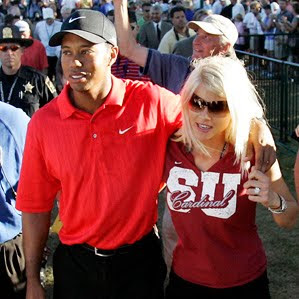 Also, don't look for Woods' wife, Elin, to be moving out of the couple's Windermere, FL., mansion anytime soon. The links legend's spouse is reportedly being paid a hefty seven-figure amount — immediately transfered into an account she alone controls — to stick with her husband.

On top of that, my source indicated Elin Nordegren Woods, the mother of Tiger's two children, has demanded — and is getting — a total rewrite on the couple's prenuptial agreement making the incentives for her to remain Mrs. Tiger Woods even more enticing.

At this point, the couple needed to remain married for 10 years in order for Woods' wife to collect a splitsville settlement of $20 million. I'm being told that time frame has been shortened — and the dollar amount increased "substantially."

Perhaps most important of all, the Woodses have already begun intense marriage counseling — at their home — with a counselor who has been conducting sessions several times daily.
Posted by Palmoni at 4:09 PM

Just proves that if you are a young male and rich, you'll be stupid to get married....Unless you found the one :P

no i really believe he was with Rachael too.

you know whats funny...why do these people always cheat with people that are not that pretty or good looking?