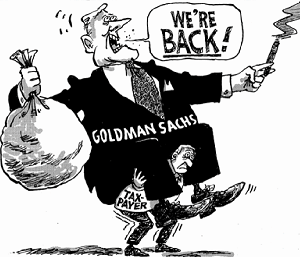 That's the latest allegation, and now FINRA and the SEC are looking into Goldman's behavior. Here's what they think from NYT:

One focus of the inquiry is whether the firms creating the securities purposely helped to select especially risky mortgage-linked assets that would be most likely to crater, setting their clients up to lose billions of dollars if the housing market imploded.

Some securities packaged by Goldman and Tricadia ended up being so vulnerable that they soured within months of being created.

Goldman and other Wall Street firms maintain there is nothing improper about synthetic C.D.O.’s, saying that they typically employ many trading techniques to hedge investments and protect against losses. They add that many prudent investors often do the same. Goldman used these securities initially to offset any potential losses stemming from its positive bets on mortgage securities.

But Goldman and other firms eventually used the C.D.O.’s to place unusually large negative bets that were not mainly for hedging purposes, and investors and industry experts say that put the firms at odds with their own clients’ interests.

“The simultaneous selling of securities to customers and shorting them because they believed they were going to default is the most cynical use of credit information that I have ever seen,” said Sylvain R. Raynes, an expert in structured finance at R & R Consulting in New York. “When you buy protection against an event that you have a hand in causing, you are buying fire insurance on someone else’s house and then committing arson.”

The woeful performance of some C.D.O.’s issued by Goldman made them ideal for betting against. As of September 2007, for example, just five months after Goldman had sold a new Abacus C.D.O., the ratings on 84 percent of the mortgages underlying it had been downgraded, indicating growing concerns about borrowers’ ability to repay the loans, according to research from UBS, the big Swiss bank. Of more than 500 C.D.O.’s analyzed by UBS, only two were worse than the Abacus deal..

Tetsuya Ishikawa, a salesman on several Abacus and Hudson deals, left Goldman and later published a novel, “How I Caused the Credit Crunch.” In it, he wrote that bankers deserted their clients who had bought mortgage bonds when that market collapsed: “We had moved on to hurting others in our quest for self-preservation.”
Posted by Palmoni at 9:45 PM

I love reading your blog, but it always crashes on my blackberry,
The problem is that the page is too long. Can you please cut the front page after every few posts?

It was so simple I couldn't figure it out..I must of been thinking like a bear!

Good dispatch and this fill someone in on helped me alot in my college assignement. Gratefulness you seeking your information.