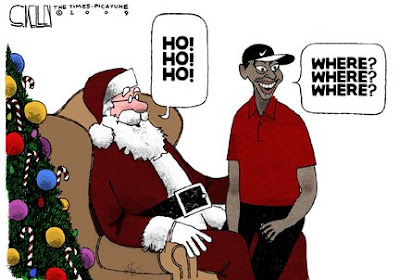 Twas the night of Thanksgiving and out of the house
Tiger Woods came a flyin’, chased by his spouse..
She wielded a nine iron and wasn’t too merry,
Cause a bimbo’s phone number was in his Blackberry.

From the top of the Tour to the basement of blues,
Tiger’s sad sordid tale was all over the news.

With hostesses, waitresses, he had lots of sex,
When not in their pants, he was sendin’ them texts.

Despite all his cryin’ and beggin’ and pleadin’,
Tiger’s wife went investin’ — a new home in Sweden.
And I heard her exclaim from her white Escalade,
“If you’re gettin’ laid then I’m gettin’ paid.”

She’s not pouting, in fact, she is of jolly good cheer,
Her prenup made Christmas come early this year.

Excellent-Where do you come up with stuff do you make it up?