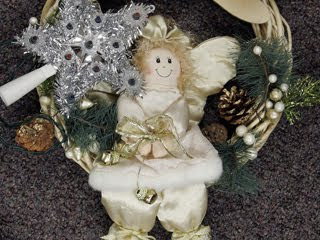 If you want to gag at political correctness gone amuck. And what's worse, the front man shill, is a disabled senior citizen Marine Vet, who found the above angel "offensive!"

There's no place for angels atop Christmas trees, according to one California man who successfully lobbied for the removal of religious symbols at county buildings after spotting a yuletide decoration last week.

Stars and other religious emblems were ordered removed from Christmas trees in all government buildings in Sonoma County on Monday following a complaint by Irv Sutley, a disabled 65-year-old Marine veteran who said the symbols were "extremely offensive" and part of the "cult" of Christianity.

Sutley said he filed the complaint with acting County Administrator Chris Thomas on Dec. 18 after noticing an angel atop a six-foot tree in the lobby of the county recorder's office. Sutley, a lifelong atheist and chairman of the county's Peace and Freedom Party, said he visited the office last week for his re-election bid next June.

Sutley said he was pleased with a subsequent e-mail sent by Thomas to managers of all 26 county departments instructing them to remove religious symbols like angels and stars from holiday displays.

That star, and that angel??? To be removed??

So in honor of political correctness, in this "holiday season" I'll post a picture of the "star" of Bethlehem. 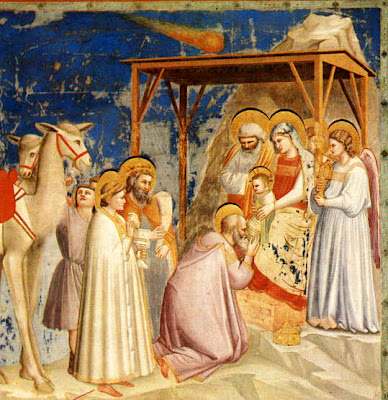 Next thing  is, we'll be closing down the museums with the Masters!

GCI just gives me pain after I sold it and still flying high. Do you know why?

Also, why is mgm so beaten?

Dude the Christains need to grow a pair and defend their religion.... Muslims have no problem standing up for themselves!

Re: Jan 7%...the SPY Feb 112 calls look like a good play then, since Jan has the shortest possible month for expiration.

Given what Micron and Marvell have come in with over the past few weeks, what do you think about TXN and INTC?
Morgan Stanley did the hatchet job on semis on the thursday before Nov op ex. It was complete b.s. about double orders and weak demand. MRVL and MU gave us the first look since then, and it looks pretty good. On NVDA's last conference call they said that they sold every possible thing that they could...which seems to be shaping up as a common thing with semis.

Have people really forgot the TRUE meaning of Christmas? The whole reason we celebrate it? I don't appreciate this man imposing his atheistic ways and beliefs on me and others. Our country is going down hill fast and it's because of people like him pulling God out of everything. I feel sorry for this man. He has no HOPE.

I've always liked NVDA and I heard that what you said. Morgan Stanley is still too bearish

yeh GCI has trapped those bearish on it..on MGM I admit I'm disgusted with how it acts--but I'll just sit with it until I turn blue

the Feb calls are the play on the S&P!!

Good riddance to removing objects pertaining to the supertition of choice in this country( for the moment ).

To anony. You don't like someone imposing his beliefs on you.....and exactly what are you doing???
Yeah, imposing YOUR beliefs on others.

We'll see how the christians howl about freedom from religion when they are in the minority in some region and the muslims want to post some artifact of theirs on gov property.

Good riddance to removing the objects of the superstition of choice... I find that an interesting and somewhat naive perspective.

This superstition of choice was one of the principles on which this country was founded upon and a significant reason for the original settler's migration. Judeo - Christian values remain as a significant component of our heritage, with part of that heritage being the right for all to have and exercise opinion with impunity - both mine and yours. If you for one, find the values associated with Santa Clause, reindeer, elves and the rest to replace the original message and reason for Christmas - you have that right, but since when does that right allow the disenfranchised minority to dilute the original and truest reason for the celebration of Christmas? I struggle with this being characterized as "imposing" ones beliefs upon another.

It's a shame that so many, under the guise of being "politically correct", demonstrate the least amount of tolerance to any behavior that doesn't fall under egregiously narrow window allowed by self appointed / anointed PC police.

I consider your reference of "freedom from religion" more telling than any comment on your post. I always understood it as "freedom of religion". Perhaps you wish to impose your definition of freedom upon me. An irony most likely lost.

Palmoni - Merry Christmas, and many thanks to your Christmas messages. To your Jewish readers, a Happy Hanukah, and to the real "stinkin' hypocrite", enjoy the spirit of this season in any manner you wish.

What's all this Muslim versus Christian talk? The complaint was not made by a Muslim, it was made a supposed "Christian". By the way, did you know that some Puritans oppose the celebration of Christmas? Much of the "anti-Christian" action we see these days is probably done by Puritan types but other religions get blamed for it. It's a shame the public can be so ignorant of the facts.