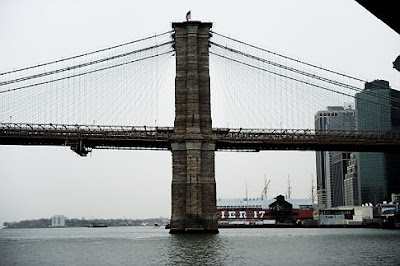 A 22 year old woman, survived the120 feet drop in icy water, and was rescued by divers. She was treading water in her pajamas.

The distraught jumper is not the first to survive the potentially lethal dive from the bridge. The most famous is Steve Brodie, a Brooklyn bookie who claimed to have jumped and survived in 1886.

"We've gotten quite a few jumpers who survived," said Cocchi, who was just starting his shift with Officer Jeffrey Dowling when the call arrived.

The divers also were involved in the search for bodies after last summer's midair crash of a helicopter and small plane over the Hudson River, while the chopper crew helped rescue survivors of the "Miracle on the Hudson" landing.

On Wall Street, when you are underwater, they just re-price your options, and pretend that the situation is life-or-death.

After all, isn't that what GOOG had to say?
Posted by Palmoni at 9:05 AM