CEBR touts the Euro over the Pound 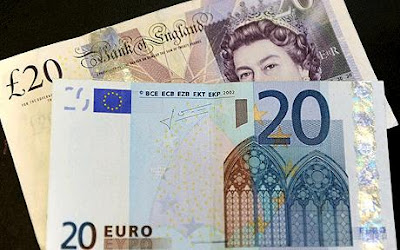 The report warns that the British economy is walking "five yards away from the edge of a cliff" and could be toppled by an "unexpected gust".

Doug McWilliams, chief executive of the CEBR, said in the report: "Rating agencies are looking for an excuse to downgrade the UK government from its AAA rating, following countries such as Greece.

"Whether markets react to Britain's fragile public finances before they react to the divergence of performance in the eurozone will determine whether sterling drops below parity. If I had to bet, I would bet on the side of parity being broken."

With France overtaking the UK in 2008, and Italy in 2009, the CEBR has little holiday cheer for the UK. But  then again, look where they are coming from. They have their Christmas party in January, because its easier to get a good restaurant!
Posted by Palmoni at 6:59 AM