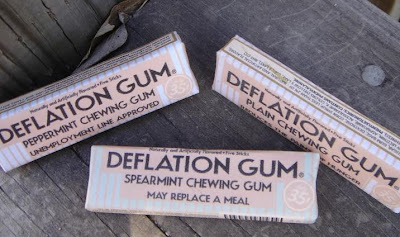 I know Bernanke is touting low rates for an extended period of time--blah blah blah...And I know Goldman Sachs is touting a zero Fed funds rate for the next two years...blah blah blah..(but when it turns against them, they'll say they were stopped out!).....But in reality, what does the TIPS market say?

The gap between yields on Treasuries and so-called TIPS due in 10 years, a measure of the outlook for consumer prices, closed above 2.25 percentage points four days last week, the longest stretch since August 2008. That’s the low end of the range in the five years before Lehman Brothers Holdings Inc. collapsed, and shows traders expect inflation, not deflation in coming months, said Jay Moskowitz, head of TIPS trading at CRT Capital Group LLC in Stamford, Connecticut.

Can any of the "Deflationistas" help me out here?

Why isn't the bond market buyin' what you're sellin'?

Get ready to clean off your "WIN" button, because the deflation story is yesterday's news!

Time to chew on a new story!
Posted by Palmoni at 8:12 AM