Urban Meyer was taken to hospital by ambulance 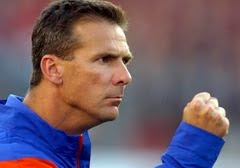 Not quite just a case of dehydration....

A 911 call made from Urban Meyer's home at about 4:30 a.m. ET on Dec. 6, after Florida lost in the SEC championship game, reveals that the Gators' coach was rushed to the hospital by ambulance after complaining of chest pains and a tingling sensation on his side.

The Dec. 6 call, obtained Wednesday by ESPN, contradicts an earlier statement from the University of Florida that the coach checked himself into a Gainesville hospital that morning for dehydration, only later to admit that he also had chest pains.

Meyer's wife, Shelley, who placed the 911 call, said her husband awoke briefly that morning and tried to get out of bed, but fell to the floor. On the call, Shelley Meyer said he was breathing and had a pulse but would not wake up. She said her husband had been taking the sleeping pill Ambien, which she said often puts him into a deep sleep.

On the call, Shelley Meyer also said her husband had never had a heart attack before but had complained of chest pains due to anxiety.
Posted by Palmoni at 6:21 PM

I think Urban will be back for next year. I dont think his ultra copmetitive nature will allow him to take a season off from Florida.

He's back--you should go and show the Gators how to do it!

I recently came accross your blog and have been reading along. I thought I would leave my first comment. I dont know what to say except that I have enjoyed reading. Nice blog. I will keep visiting this blog very often.