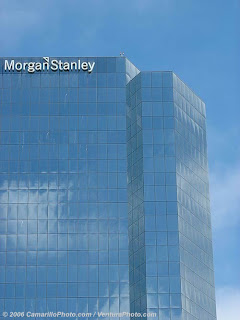 Dec. 29 (Bloomberg) -- Morgan Stanley was accused in a lawsuit of defrauding investors in a collateralized-debt obligation, called the Libertas CDO, by collaborating with ratings companies to place triple-A ratings on the notes.

Morgan Stanley, the sixth-biggest U.S. lender by assets, arranged the offering as it was short-selling almost the entire $1.2 billion worth of assets in the CDO, according to a complaint filed today in federal court in New York.

“Morgan Stanley was betting the entire investment it was promoting would fail,” the public employees’ retirement system of the Virgin Islands said in the complaint. “The firm achieved its objective
The notes, due 2045, collapsed in value, according to the complaint, which includes claims for fraud and unjust enrichment. AAA is the highest rating for fixed-income instruments. The portfolio was 92 percent residential mortgage- backed securities and included exposure to more than $130 million in loans from Option One Mortgage Corp. and $100 million from New Century Mortgage Corp., both lenders to homebuyers with poor credit scores, according to the complaint..

“By collaborating with major credit-rating agencies to place Triple-A ratings on the rated notes, Morgan Stanley intentionally or recklessly misled investors in the Libertas CDO,” according to the complaint. “But for Morgan Stanley’s violations of law, the rated notes never would have been issued.”
Posted by Palmoni at 9:31 AM