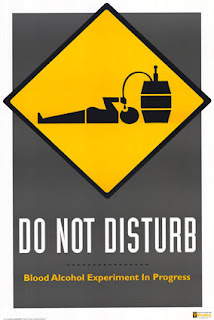 Looks like we have a mark that even the New Year revelers can't top.

A Sturgis woman had a blood-alcohol level of .708 percent, possibly a state record, when she was found earlier this month behind the wheel of a stolen vehicle parked on Interstate 90, according to Meade County State’s Attorney Jesse Sondreal.

A South Dakota Highway Patrol trooper discovered Marguerite Engle, 45, on Dec. 1 passed out behind the wheel of a delivery truck reported stolen in Rapid City.

Checks with local and state labs where blood-alcohol levels are tested suggest Engle’s reading may be the highest ever recorded in South Dakota, Sondreal said.

Sondreal said a state chemist recalled a sample that tested .53, but nothing higher, in his more than 30 years on the job.

Sondreal’s research indicates that a blood-alcohol level of .40 is considered a lethal dose for about 50 percent of the population.

After she was found, Engle was hospitalized and freed on bond.
Posted by Palmoni at 10:59 AM

I always figured that women can out drink guys!

If the profit of a group network is to lash with other people, you difficulty a group network that has masses of members. And Facebook plainly has copiousness of members, in defiance of all the adversative publicity it has received lately hither its solitude problems. inclination all 500 million Facebook users resettle to Google Me? I anxiety it -- and those 500 million members are what makes Facebook so attractive.

What I wouldnt give to have a debate with you about this. You just say so many things that come from nowhere that Im fairly certain Id have a fair shot. Your blog is wonderful visually, I mean people wont be bored. But others who can see past the videos and the layout wont be so impressed with your generic understanding of this topic. Stella Rosa