Geithner wants an extension of the TARP until Halloween 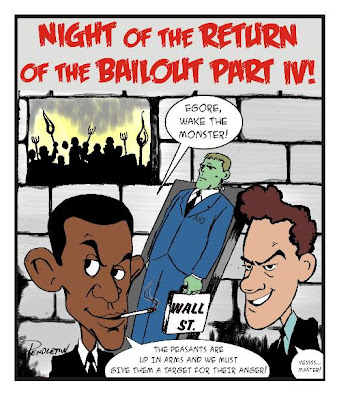 He'll send a letter notifying Congress of his intent today.

Let the banks give back the money, to pretend they are in good shape, but keep the lifeline out for them!

Dec. 9 (Bloomberg) -- Treasury Secretary Timothy Geithner plans to tell Congress that the Obama administration will extend the $700 billion financial-rescue program until next October, according to people familiar with the matter.

While the Troubled Asset Relief Program expires on Dec. 31, Geithner can extend it by notifying Congress. A letter notifying Congress of the extension could come as soon as today, said the people, who declined to be identified. Andrew Williams, a Treasury Department spokesman, declined to comment.
-------

And coincidentally, just as the WaPo did a puff piece on Neel Kashkari roughing it in the woods, two days before he was hired by PIMCO, today, we have the TARP whitewash--the 135 page report her.

And then, today, we have Geithner asking and then getting the TARP extension.

And now Obama says he's going to pay down our debt, with the TARP money he borrowed!
Posted by Palmoni at 7:27 AM