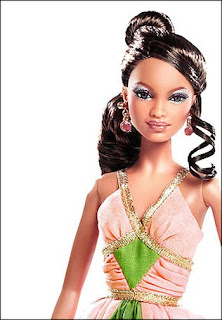 Anyone check out how much money is still bet short?

These bears are like Washington Post columnist Eugene Robinson, who are always finding fault. His beef with Tiger, is that no woman of color have shown up as his mistresses!

Here's my real question, though: What's with the whole Barbie thing?

No offense to anyone who actually looks like Barbie, but it really is striking how much the women who've been linked to Woods resemble one another. I'm talking about the long hair, the specific body type, even the facial features. Mattel could sue for trademark infringement...

But the world is full of beautiful women of all colors, shapes and sizes — some with short hair or almond eyes, some with broad noses, some with yellow or brown skin. Woods appears to have bought into an "official" standard of beauty that is so conventional as to be almost oppressive.
---------
Sue Mattel then!

Has Mr. Robinson checked out Mattel's barbies? Mattel had a doll for Alpha Kappa Alpha, the first black sorority in the United States, going on over 100 years.

Did he see that Barbie?

It's the Tiger Woods version!
Posted by Palmoni at 7:11 AM