Bernie Madoff hangin' with the inmates 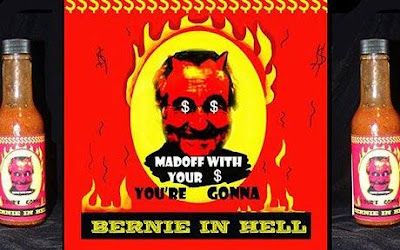 Bernie Madoff had little to lose by confessing to masterminding the world's biggest Ponzi scheme -- he's dying of cancer, sources told The Post...

"He's been taking about 20 pills a day for his cancer," said one inmate.

"He talks about it all the time. He's not doing very well."

There's been much speculation as to why Madoff took the entire fall for the scheme -- and rumors of his suffering from pancreatic cancer surfaced many months before he arrived at the Butner, NC, complex in June.

The prisoners did not confirm that's the form of cancer he's suffering.

Meanwhile, a bare-chested Bernie has been killing time at the prison participating in Native American religious purification ceremonies held at an on-grounds "sweat lodge," other sources said.

He accepted invitations from Native American inmates to join them at their weekly prayer services. The ceremonies involve praying, using heated rocks to induce sweat and smoking from a ceremonial pipe.

It is unclear whether the 71-year-old Madoff checked out the ceremony because of health reasons. For centuries, Native Americans have used sweat lodges to help detoxify the body mentally, spiritually and physically.

Inmates who participate are usually shirtless, and Madoff was no exception earlier this month during the first ceremony he attended, according to the prisoners.

Madoff is also making new friends at the prison complex through another unlikely clique -- the homosexual posse, although the relationships are purely platonic, according to the sources.

"In prison, you stick to your own kind, but he's doing the exact opposite by hanging with the Indians and [homosexuals] -- so who is going to have his back?" wondered one jailbird.

Another inmate said various "gangs" at the prison are trying to recruit Bernie to their crews.

Some prisoners are also bending over backward trying to satisfy his hearty appetite by regularly cooking sandwich wraps for him back at their cells.

"They're trying to kiss his butt," said one source.

Madoff was quickly assigned a job in the prison's engraving section when he first arrived, but last month he was transferred to a job painting fences.

I'm surprised they haven't killed him, though he did wrong the weathly elite of society and a few "non-profit" orangaizations. So I guess these guys don't really care.

Well they were touted here Thursday--and FNM FRE and FNA have just about doubled since.

But here's a reason with some meat on it. John Hempton, a real sharp guy, at Bronte Capital, put out a 7 part thesis on why the FNM and FRE stubs actually have value.

Check it out at his site.

Here is his latest on FNM and FRE

Now think also why Central Bankers are keeping rates so low. We have an increasing foreclosure rate--thus increasing times to take houses through the legal process, thus Central banks need to keep the cost of funding those homes down, until the banks can get rid of their housing inventory.

And the speculators want to play those names FRE and FNM--not they are finally looking at the preferreds.

Here's something else to consider. Notice this tongue in cheek "tombstone" for Freddie

Actually there is a bit more truth there than anyone wants to recognize!!

what do you think about NOK? they haven't gone up at all during this rally but has been down like $3

so would you buy FRE or FNM at today's prices? do they have anymore upside?

I still like the preferreds as an investment, but I'd wait for a better entry point on the common.

I can't tout them after they've doubled in two days.

The one easiest to make money on though is FNA. Bigger spread, fairly liquid, and it moves around.

NOK looks like it is bottoming on the chart, but I just don't trade the name.

Too slow for me, as I get impatient

Also on NOK--Here's what Deutsche Bank had to say about it this morning:

Competitive pressure increasing into 2010. While we continue to believe a cyclical
upturn in handset demand is likely, competitive pressure in smartphones will
significantly increase into the seasonally important Q4 with 15-20 competitor models
hitting the market. We now believe Nokia's portfolio refresh will be inadequate to
enable share gains in Q4 which its current FY guidance implies. In addition we believe
the smartphone segment will commoditise in 2010 pressuring industry margins, while
competition in the low end is also rising. We cut estimates below consensus and
downgrade to Hold.
􀂄 Turning cautious on Q4 and less bullish on 2010. Our upgrade to Buy earlier this year
was driven by our view that: 1) handset demand would recover benefiting from
inventory and cyclical/consumer normalisation into 2010. 2) Nokia’s hi-end focused
portfolio refresh would enable it to at least maintain share and 3) Such improving
earnings visibility would re-rate the stock to 16x mid-cycle fwd P/E. While we still
expect a cyclical handset recovery, our analysis and channel checks suggest
competitive pressure in smartphones will significantly increase in Q4 with 15-20 new
models launched against Nokia’s 4-5. Also, we expect the currently highly profitable
smartphone segment to commoditize in 2010. This will in our view dampen any gross
margin improvement resulting from a cyclical demand recovery. Additionally we see
competitive pressure in the low-end increasing in Emerging Markets.
􀂄 Cutting estimates & target and lowering to Hold. In light of severely heightened
competitive activity, we feel Nokia’s product portfolio may not be competitive enough
to grow its market share in Q4 as its current guidance implies. We hence lower Q4E
market share from 39.3% to 38%, below implied guidance. For 2010 we lower market
share to 38% from 38.5%, leaving handset market growth (+9%) unchanged. Overall
we downgrade 2009/10 EPS by ~7%. Having recently disappointed the market with its
H2 margin outlook, we believe further market share uncertainty and downward
pressure on consensus will prevent a re-rating and offer better entry points in the
future.
􀂄 Lowering target; apply 20% discount to mid-cycle P/E. Our new target price (E9.5
from E13) reflects our estimate cuts and implies Nokia trades on 13x 2010E P/E, a
20% discount to its 16x historic mid-cycle fwd P/E to reflect earnings/market share
uncertainty. If we assume the stock traded on its mid-cycle multiple then the current
share price implies a market share loss to 34% in 2010 in our view. Key risks: Macro
weakness/improvement driving above/below handset demand; share losses/gains to
competitors; exchange rate movements.

thanks , trying to find a replacement for NVDA..tryingt o unload today

I think momo can easily take it to 5 in this market.