The selling of grotesque 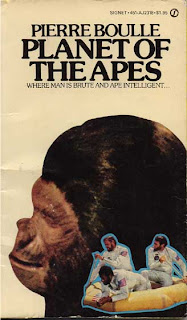 "I know my appearance is grotesque, my figures repulsive, my features bestial, my smell sickening, the color of my skin disgusting. I know the sight of this ridiculous body of mine offends you, but I also know I am addressing the wisest and most learned apes of all, those whose minds are capable of rising above mere sensory impressions and of perceiving the essential substance of being apart from his wretched material exterior..."

And so begins Chapter XXV of "Planet of the Apes."

It appears that in the courtroom, the adjective grotesque sells.

After all, isn't this what Colonel Jessep Nathan said in "A Few Good Men?"

You can't handle the truth! We live in a world that has walls, and those walls have to be guarded by men with guns. Whose gonna do it? You? You have the luxury of not knowing what he knows. That his existence, while grotesque and incomprehensible to you, saves lives. You don't want the truth because deep down in places you don't talk about at parties, you want him on that wall, you need him on that wall. He uses words like honor, code, loyalty. He uses these words as the backbone of a life spent defending something. You use them as a punchline. He has neither the time nor the inclination to explain himself to someone who rises and sleeps under the blanket of the very freedom that he provides, and then questions the manner in which he provides it. He would rather you just said thank you, and went on your way, Otherwise, he suggests you pick up a weapon, and stand a post.

Either way, he doesn't give a damn what you think you are entitled to.

But what people don't remember, is that the courtroom scene in the Planet of the Apes was developed courtesy of the Scopes Monkey Trial, with the second derivative of it here, on my Inherit the Wind post. On the day of that post, Bob Doll, was bearish and said we were heading to the low 800s; today on CNBC he was bullish, after the S&P is now comfortably above 1000.

What changed his mind?

Especially since we have a "Dr. Zaius" look-a-like, minus the beard and a few chromosones touting plastic surgery before our hallowed halls of Congress!

Showing that grotesque sells even in health care.

Even if it's tongue in cheek and carried by Onion!