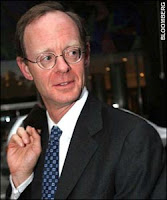 Remember when JC Flowers walked away from Sallie Mae, and then it was annouced he wouldn't have to pay the $900 million break-up fee? He also was the advisor who spent a few days looking over Merrill's books and tell Ken Lewis they were good.

He and a few other multi-billionares bought IndyMac; and they got the loans at fire sale prices. Now he's letting his investors in on that transaction to milk the taxpayer without the 2 and 20 fees. Why? Because he now down about 70% on his $7 billion second fund and he's looking to placate investors:

Flowers' $7 billion second fund is down between 60% and 70%, according to estimates from knowledgeable sources. (Flowers declines to say.) And some of his biggest bets, such as Hypo and HSH, are unlikely ever to make his investors whole.

Now you know why private equity wants to buy banks. They can screw the taxpayer with the deals they make with Uncle Sam, and hope Sam's largress offsets their uglier investments!