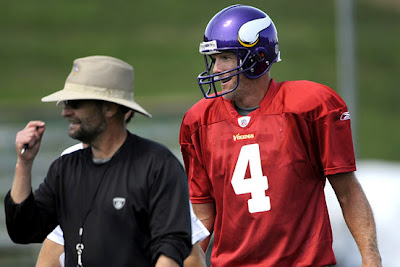 Oh doesn't this enrage the purists! Sort of like the perma bears--who proudly proclaim the market should be going down, that despise the Government intervention, and who believe that the prices on the screen aren't real.

After all, don't we hear this? "Brett's too old--he throws too many interceptions, he's washed up."

But what's the price on the screen?

So deal with it!

full disclosure-Had a "mini-tryout" with the Green Bay Packers as a kicker in 1980--After going through Tom Birney and Chester Marco, the Packers had a choice of taking a complete unknown who jumped on the practice field that could kick 52 yard field goals with a work boot on, or hire someone with experience. My buddy had a house right next to the Stadium, and after the Pack watched me drill some, I then gave the Pack his number hoping I could play on Sunday. The teaser on the news that night was the Packers had decided to take a new kicker. Ever being an optimist, I called everyone around to watch the news, because I thought I must of missed the phone call, and that they were going to announce my name. The phone rang right before the news. I looked up and said, "Tell them I'm here!"

Well, we know that phone call wasn't for me! A few minutes later, we found out on the news that the Pack had hired Jan Stenerud. And no word about the kid with the workboot, that for a few minutes at least, made someone at the Pack think! At least it was a Norwegian that beat me. He could handle the Green Bay cold! So excuse me for my optimistic disposition. I was born with it!

And now, Favre goes to the Vikings!

So you don't think I'm not jazzed about MNF on October 5 with the Pack and the Vikes at the Metrodome?
Posted by Palmoni at 7:17 PM