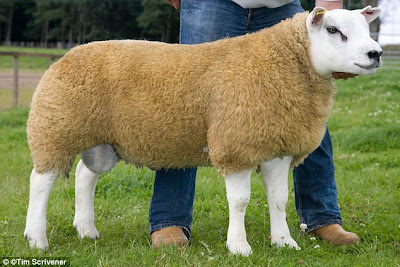 The world's most expensive sheep was just sold--Deveronvale Perfection, for £231,000, and now he's going to spend the rest of his life breeding.

So that was the world's most expensive sheep?

I thought the world's most expensive sheep were the ones on Wall Street listening to the bears! After all, they're costing them the most!

You know what these pigeons remind me of who listen to these seers proclaiming doom? Like those folks who are buying birds from the Chinese. As in racing birds. As in pigeons!

Last week, we heard about the Chinese "Mafia" killing pigeons, and cutting off their legs, so they could take the identifying bands from birds legs in Belgium, and put these bands on their knock off pigeons bred in Asia.

They can't breed their own racers, so they knock off someone else's birds to get the band. Because in China, the band is the pedigree.

A pedigree without a bloodline! Isn't that rich?

My Dad used to race pigeons. And even if they had the Belgium pedigree, he had to look the birds in the eye, check out their wings, hold them in his hand and check them out before he would use them.

Why doesn't someone do that with the bears research? Because they've just got the band, and not the balls.

They have the Chinese pedigree.

A dressed up, gussied up story without the blood!

Charles Darwin also fell in love with pigeons. Now we know he already named the cockroach. But you probably don't know that the pooping pigeon was his inspiration for The Origin of Species. He was the first Chinese pigeon fancier. He didn't want to hear about the Messiah bloodline, or the cross. So he dressed up and gussied up a story without the blood!

After all, wasn't this in Darwin's biography: "When he talked about the 'hidden hand' of natural selection thereafter, he almost always visualized a pigeon breeder picking a favored bird out of one cage and putting it with another bird, also chosen for favorable attributes. He could not help but anthropomorphise natural selection into a mating ceremony deftly engineered by a wise, all-seeing and sensible English gentleman."

Has anyone read Superdove---How the Pigeon Took Manhattan? It's a great book on pigeons. But it will also tell you about the Palmetto Pigeon Plant in South Carolina, the largest pigeon operation in the US.

They do business in "squab." Selling pigeons as food.

Why have they been so successful is selling squab?

Because the largest market for squab in found in this country's Chinatowns!

So when are the bears going to start eating their own cooking!?

After all, the pigeons have taken over Manhattan!

And it's a mockingbird for the bears!

To go with his cockroach!
Posted by Palmoni at 10:18 AM

Palmoni: A lot of people are calling for a mid-September pullback. What is your opinion?

I'm still long on C and would like to try to time a pullback if it is indeed going to happen.

Palmoni: i've only got $1k left...missed out on GCI...do you think that is still a buy on monday? what do you think i can put my money into tomorrow?

jay: We could get it, if we rally enough. I think the market always tells us what it is going to do as far as timing.

would you still jump into GCI tomorrow?