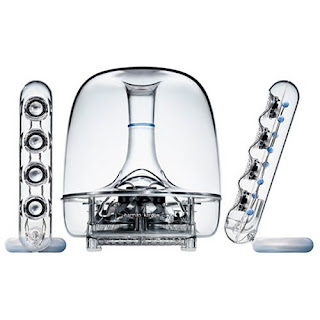 Barron's can't read a tape either.

Such speculation has driven shares well beyond their worth. Harman has cut costs, and its auto stereo unit has good brands like JBL, Infinity and Harman/Kardon, but rising competition and shrinking margins thwart its return to profitability. With automaker customers increasingly cost conscious, Harman may not see peak margins in the low-teens again. "We think Harman is priced for a combination of revenue and operating margin in 2011 that is overly optimistic," notes Credit Suisse analyst Christopher Ceraso, who values the stock at 18.

The cash for clunkers program has revved up car production -- and false hopes. Harman stereos find their way into everything from Aston Martins to Volvos, but the lower-end Ford, General Motors and Toyota models that benefit most from the government's program aren't big customers. What happens once the program ends and artificially accelerated demand stalls?

Harman's enterprise value is a whopping 30 times its Ebitda (or earnings before interest, taxes, depreciation and amortization). "In my opinion, once the stock market becomes soft, investors will realize how ridiculous its valuation is, and they will run for the exit," says Michael Goldman of Abbot Capital Partners. "You won't even need JBL speakers to hear that noise."

I mentioned Harmon on this blog on July 16, when this name was 23 and change, and the huge amount of August calls being bought. Two days later, we had a fake "buy-out" offer for $50, and the stock traded up to $38 in the pre-market action.

On July 20, I advertised getting in the stock at $21.33, when it got slammed in the comments section of that post. It's up almost 40% since.

If they knock Harmon down on the Barron's slam, the stock can be bought again.

Barron's can't read the tape, and neither can the shortsellers who are pimps for Barron's.

Harmon ended the latest quarter with $600 million of cash, and they have streamlined operations so they can operate profitably--they have generated $190 million or permanent savings with their cuts.

Why isn't that brought up? And how much competition is left?

Look at the disengenious of the shorts arguments--Oh no--The ending of the" Cash for Clunkers" program will hurt Harmon.

Let me ask these learned fools just a question or two, who continually try and attempt to con the public with their ruse of intellectual superiority.

Didn't Harmon come out with some new programs last quarter for autos? Weren't they for Ferrari, some new JBL models for Toyota, and some Mark Levinson models for Lexus? And didn't Audi's infotainment product win product of the year award?

Doesn't Harmon now have new agreements with Mercedes, Land Rover, BMW and Mini? Are these the autos that the cash for clunkers buyers are splurging on?

So why make a point, that is ridiculous?

How about Harmon's relationship with Apple computer? Is AAPL suffering?

Last I looked, there was 6.66 million shares short on Harmon, in this market that bottomed at 666, of which the shorts, are still in denial.

This is just another example of the shorts not understanding the fundamental forgiveness of the stock market, as buyers now include enterprise value into their calculations--something the shortsellers don't.

And they were wrong at S&P 666, and they'll also be wrong here with their 6.66 million shares wrong way bet.